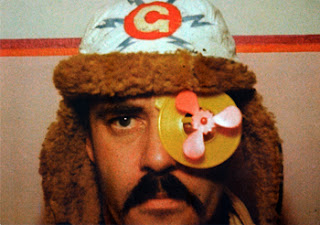 Tim Pilcher, founder member of the Comic Book Alliance, will be giving a talk on Jeff Keen, how comics influenced his work and how he, in turn, influenced (or at least foresaw) the future of comix, this Saturday (23rd February) at Brighton Museum at 2.00pm.

Artist and film-maker Jeff Keen (1923-2012) was one of the great figures of the British post-war avant-garde. Keen's work reveals a wild spirit of anarchic play, a fascination with surrealism, and a love of popular culture. His life-long commitment to Brighton & Hove will be celebrated in this display featuring a selection of his films alongside his paintings, drawings, poetry and assemblages.

Keen, who worked for Parks and Gardens for several years, spent most of his artistic career in Brighton and used the city as a major inspiration for his work. He ignored the hierarchies of the London arts scene and the wider world of avant-garde cinema in favour of a radical commitment to locality and intimate community.

Keen’s work focuses lovingly on a close-knit circle of real and imaginary friends at work and at play in and around Brighton & Hove.

• The Guardian: www.guardian.co.uk/artanddesign/2012/jun/24/jeff-keen?newsfeed=true
Posted by John Freeman at 7:06 am