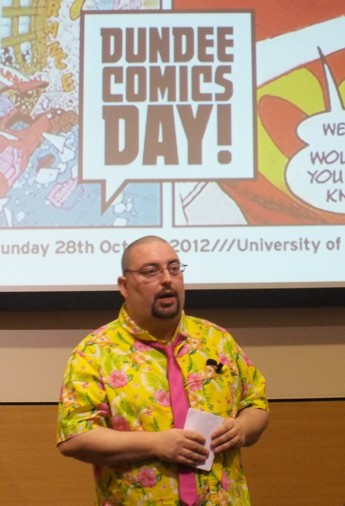 The Dundee Comics Day has been running as part of the Dundee Literary Festival at Dundee University since 2008 under the guiding hand of Dr Chris Murray of the School of Humanities (above). The event treads the fine line between the accessibility of a public Lit Fest and the seriousness of an academic conference and now, with comics courses being run at the university, it now adds an educational element for the course students. While the main day of this year's DCD was, as usual, on the Sunday, this year the event did expand out somewhat with a screening of the documentary Grant Morrison: Talking with Gods at the Dundee Contemporary Arts cinema on the Friday night and a talk and signing session with artist Dave Gibbons on the Saturday afternoon. The downthetubes photo review of the Dave Gibbons event is here. 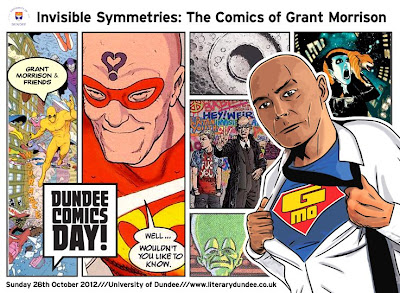 The main day however was Sunday 28 October 2012 under the titleInvisible Symmetries: The Comics Of Grant Morrison, with Grant Morrison himself and a selection of his British and Canadian artistic collaborators. The number of attendees at Dundee Comics Day has increased over the years as the guest list has increased and as more people hear about the event. Last year's DCD, with its predominance of 2000AD art and script droids, had perhaps the largest turnout to date but the Dave Gibbons talk on the Saturday appeared to match that turnout while the appearance of Grant Morrison on the Sunday easily brought DCD's largest turnout in all the years that it has been running. 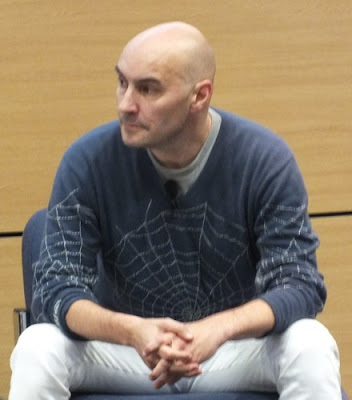 The hour long morning session was devoted to Chris Murray interviewing Grant at the front of the large and well equipped lecture theatre before opening the discussion out to include questions from the audience. This took in his earliest work on Near Myths and Starblazer, through his IPC and Marvel UK work and onto his better known American superhero work. While the difference between Chris' academic questions and the audience's more fannish questions was noticeable, Grant took them all in his stride and, for all the adulation he receives from some sections of comics fandom, he quickly relaxed into the interview and came across as a regular guy. 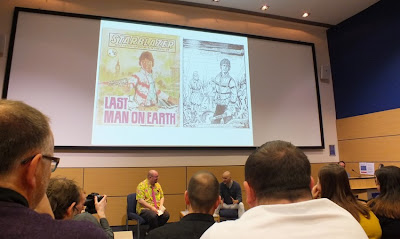 Lunch gave the attendees a chance to inspect the entries in the Dundee Comics Prize competition for a 3 page story and cover for an update of the 1940s DC Thomson superhero character Mister X which were in the corridor outside the main lecture theatre or the original 2000AD and Megazine artwork on display upstairs in the Baxter Suite exhibition The Art Of Judge Dredd. The cold buffet selection for lunch was included in the cost of the £15 ticket which covered both the Saturday and Sunday events.

After lunch came five of Grant's artists in a run of half hour talks which normally included a QandA element at the end. First up was Rian Hughes (below) who has previously appeared at DCD several years back. He covered the Grant Morrison Dan Dare series in Revolver and Crisis that he had illustrated plus he gave a general overview of his work including a vast selection of logos for various DC comics as well as stylised versions of Wonder Woman, Batgirl and Supergirl for DC 's merchandising arm. 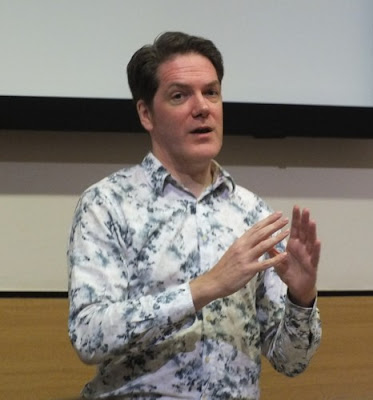 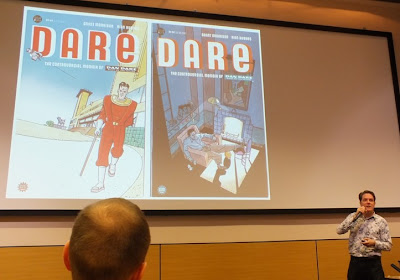 Next up was Frazer Irving (below) who concentrated on displaying and talking about the covers that he has produced for 2000AD and DC Wildstorm. Fraser was the first of the guests to connected his iPad to the lecture theatre's main screen and it proved to be an interesting and much more dynamic and interactive experience than the more traditional Power Point presentations as he zoomed into the specific covers and then into details on the given cover before moving on to his next subject. 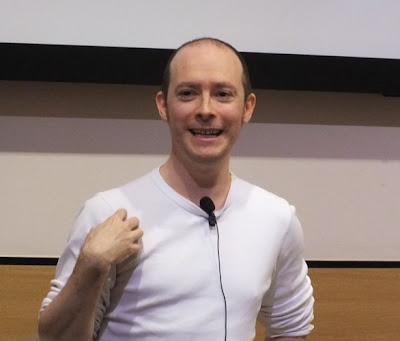 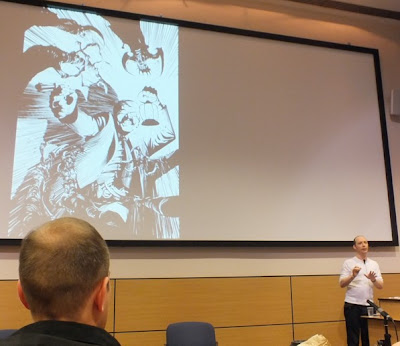 The second break of the day allowed the first of the two signing sessions to take place in the Baxter Suite. The increased number of attendees did put a strain on what in previous years had been relatively quick signing queues and this first signing session ran over so badly that it had to be curtailed to allow the next batch of guests to give their talks. While it may not have been obvious to the academic organisers, perhaps not being used to such behaviour, it was obvious to those of us in the audience that some attendees were expecting to get serious numbers of books and comics autographed based on the piles of items that they were arranging and rearranging during the talks. Indeed an announcement had to be made prior to the second signing session that only one or two items should be presented for signature. 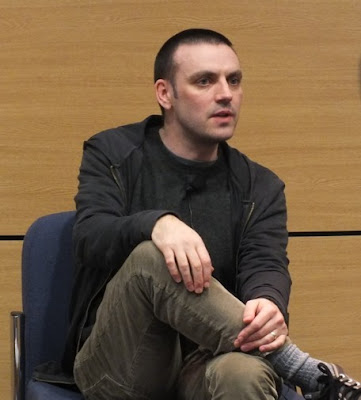 The third session of guest talks brought Frank Quitely (above) back to Dundee having appeared at DCD last year. With pages of the newly remastered Flex Mentallo on the screen behind him, he talked and took questions about his work with Grant and his current artistic style. For someone perhaps best known for his DC work, when asked what characters he would like to work he he listed Spiderman, Daredevil and the Hulk. 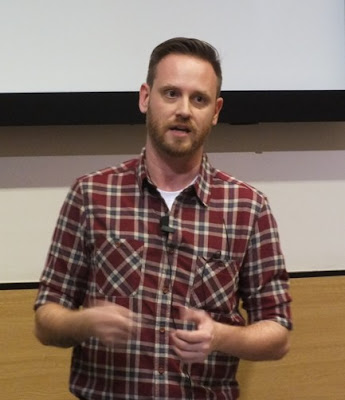 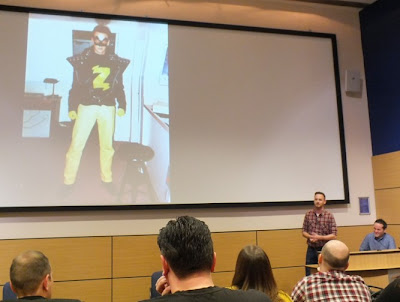 Next up was Canadian Cameron Stewart (above) who pointed out that his first "collaboration" with Grant Morrison was when he donned a Zenith outfit for a costume party in Canada many years before. As with some of the other guests, Cameron described the differences he had experienced between working traditionally with paper and then moving on to creating his art digitally.

The final guest of the day was artist and colourist Peter Doherty (below) who chose, perhaps wisely as the fifth of five artists talking that day, to concentrate on his colouring work showing examples of his Judge Dredd work as well as, of course, Flex Mentallo. Peter's laid back presentation concluded the guest's individual talks for the day after which most attendees made for the Baxter Suite again to join the long signing queue as the scheduled time of the concluding roundtable discussion came and went. 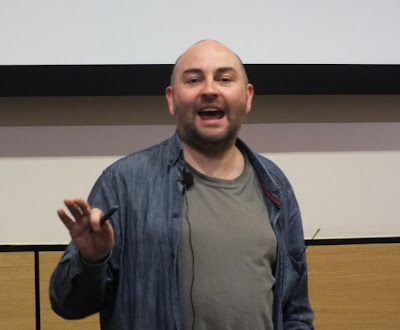 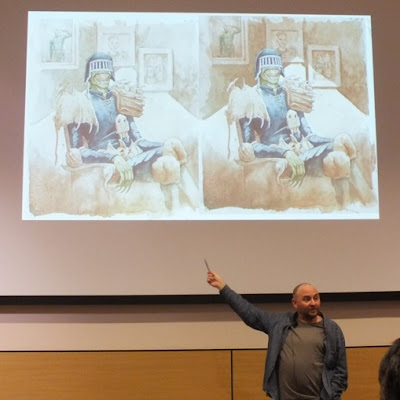 Indeed while the Dave Gibbons signing on the Saturday was scheduled at the end of Dave's talk with nothing due after it, the length of it was never really going to be an issue. However it was the signing sessions, more than the couple of technical glitches with the presentation equipment, that proved the most problematic for Sunday's schedule. The scheduling and control of the signing sessions is something that, while never really a problem before at the Dundee Comics Day, will need to be reconsidered for the future.

That said the weekend's events were interesting mixture with a good selection of presentations and presenting styles and all the guests seemingly relaxed about answering questions about their work. It certainly was something of a coup for Dundee to get both Dave Gibbons and Grant Morrison, as well as so many of Grant's artistic collaborators, to take the time to attend this year.

Indeed given that this year the event had Dave Gibbons, Grant Morrison and Frank Quitely appearing, there is really only one other British comics creator that could top those names for next year - but no pressure there Chris!

There are more details of the Dundee Comics Day on its Facebook page.

beyond gutted i was not there. hoping that some of these talks/interviews will be published/podcast somewhere??