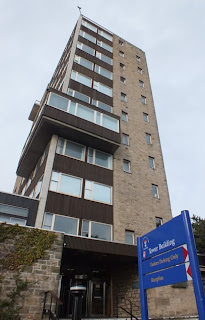 The Dundee Comics Day returned to Dundee University's Tower Building for its fifth year as part of the Dundee Literary Festival and this year the normally one day event spread out over the weekend. Friday 26 October saw a screening of the documentary Grant Morrison: Talking with Gods at the Dundee Contemporary Arts cinema which tied in with the main Sunday event, Invisible Symmetries: The Comics Of Grant Morrison. 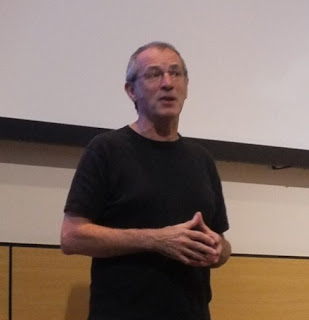 Before the main day on the Sunday, Saturday afternoon brought artist Dave Gibbons to Dundee almost forty years after his first DC Thomson strip, The Wriggling Wrecker, was published. With the Lit Fest's programme having to be published before this event was firmed up, it was described very generically as a 'Comics Workshop'. 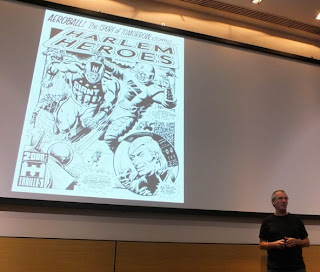 Anyone expecting to be handed a pencil and a piece of paper as they entered was going to be disappointed however - but not for long. On the day Dave Gibbons stood in front of a busy lecture theatre for over one and a half hours talking about his career, his process for taking a script page through to a final coloured and lettered art page (a shortened version of the lecture he had given at Dundee's Duncan Of Jordanstone College of Art and Design the day before), and finally gave a demonstration of the Madefire e-comics app that he is involved with. 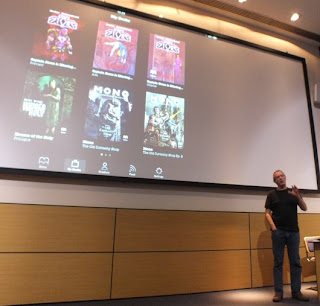 At ease in front of the audience, and with plenty of anecdotes and humour in his talks, this made for a fascinating and informative event that seemed to go down very well with the audience. When it was announced that there would be the expected signing session afterwards virtually everyone adjourned upstairs to the Baxter Suite (currently the location of the university's Art Of Judge Dredd exhibition). 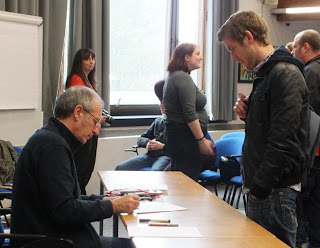 With a queue of people stretching over half way around the suite, Dave started into signing and sometimes sketching in the books presented to him most of which, it has to be said, were various editions of Watchmen. As the good-natured queue slowly worked its way around the room Dave dedicated his signatures and took the time for a quick chat and to shake the hand of each person there.
If any criticism could be levelled at the Dundee Comics Days of previous years then it would be the fact that most guests are only allocated 20 minutes to give their talk or presentation followed by 10 minutes of questions from the audience. For guests with decades of experience in British comics, and much to tell, this is simply not long enough. The 1.5 hours of Dave Gibbons' talk showed that this mold can be successfully broken especially with such a interesting, knowledgeable and courteous guest.