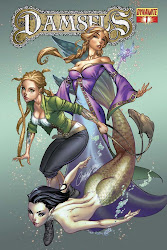 Fantasy comics are definitely seeing something of an upswing in popularity right now, a reflection, perhaps of a general desire to escape the doom and gloom of everyday life in a recession. Well, another title is about to join the fray -- Damsels, from US publisher Dynamite Entertainment.

On sale in comic shops in September, the comic is being written by Leah Moore and John Reppion , with stunning looking art by Aneke, and dynamic covers by J. Scott Campbell and Sean Chen.

In Damsels #1, Cinderella, Sleeping Beauty, The Little Mermaid, and Snow White come together with other damsels in a new adventure filled with danger and intrigue, as the alluring princesses of classic fairy tales take up arms to save their kingdoms from war.Rediscover the darkness at the heart of fairy tales and why there will be no happily ever after. 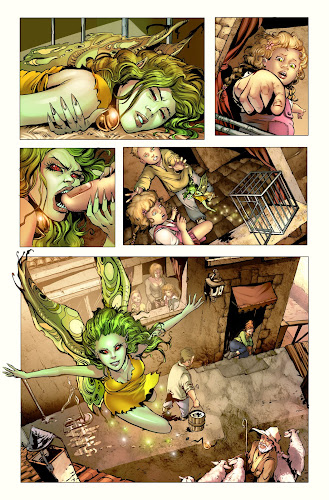 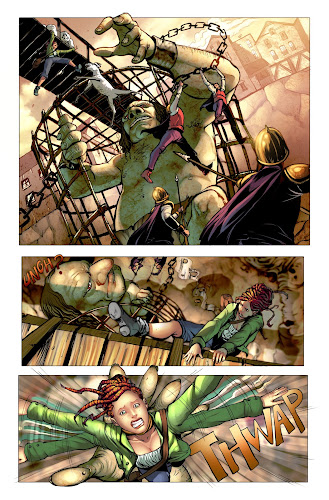 Damsels opens with Rapa wishing she had not got out of bed that morning, if she had a bed to get out of that is. The day began badly and has gone rapidly and literally downhill ever since. A series of peculiar and baffling encounters throw obstacle after obstacle into her path, intent it seems on preventing her progress. The thing is, until today she had no idea she was trying to make any progress, toward anything!

A collection of hazy memories and bewildering tattoos are all she has to help her figure it all out, and to be honest, she'd just as soon not bother. Around her, we see the mountain city of Caumont thrown into overdrive by the arrival of Queen Talia and King Aurore of Perrault. The streets are thronged with cheering people, does it matter they aren't exactly sure why they are cheering, or for whom?

Damsels joins a growing number of fairy story inspired comic titles on sale now, which include Vertigo's Fables and Dynamite's own fantasy comics such as their adaptation of Game of Thrones.

"We are thoroughly enchanted to be working on such a spellbinding series," says writers Leah Moore and John Reppion. "It's fantastic fun for us as writers to be able to play with characters and concepts that are familiar, but then put our own Moore & Reppion style spin on things.

"Yes, there are Damsels and yes, there will be plenty of distress, but nothing is how it seems, and there is brutal action and weird surprises at every turn. We have had so much fun writing this, and we are so pleased with the art team Dynamite have set us up with. We can't wait to see it in print."

"We've been talking about Damsels for a long time internally, and trying to figure out who the best writers would be," states Dynamite Publisher Nick Barrucci. "Leah and John were at the top of the list, but they had taken a break from comics. Debating who to approach, we followed up with Leah and John to see if they would script once time freed up. They said yes. It was the best decision for the comic.

"Get ready for one hell of a ride. Not every fairy tale has a happy ending."

- Damsels #1 is on sale in comic shops in September. To find a comic shop near you visit http://www.comicshoplocator.com/