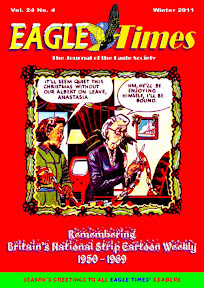 The latest issue of Eagle Times - Volume 24 No 4 - is now available from the Eagle Society.

Membership of THE EAGLE SOCIETY is via Annual Subscription to EAGLE TIMES magazine, which is published four times annually. The Subscription rate for 2011 is held at the 2010 rate: UK £23, Overseas £34(in £s Sterling, please) Postal applications to: Keith Howard, 25A Station Road, Harrow, Middlesex HA1 2UAUnited Kingdom. If you wish to pay by Paypal (to the eagle-times hotmail address below) we request an additional payment of £1. Enquiries: eagle-times@hotmail.com