Dan Dare art up for sale on eBay 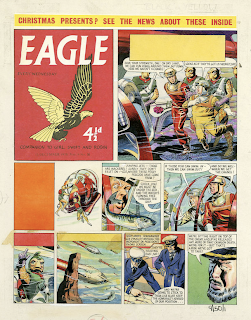 A page of Dan Dare artwork from the original Eagle is currently up for sale on eBay, on offer from American comics creator and editor Scott Dunbier.

In the story, radio and television transmissions are being disrupted throughout the Solar System by an unknown force. Spaceships are disappearing. After a rocket ship carrying Sir Hubert Guest goes missing, Dan and crew set out to discover what has happened to it.

They find a fleet of huge alien craft containing peaceful aquatic creatures called Cosmobes who are fleeing from another aquatic race, the warlike Pescods, whose "Crimson Death" weapon destroys all metals on contact.

Attempts to destroy the Pescods' pursuing fleet fail, and they dive into the Earth's ocean and begin to build themselves a city. Fortunately for Earth the Pescods' settlement is on top of the submerged volcano Krakatoa, and when it erupts due to seismic disturbances from the pesky Pescods, they are all destroyed.


The art measures 9.5 x 12.5 inches on large illustration board; the art is in nice shape but has some staining (perhaps no surprise given the many horror stories told down the years about how such art was treated by some publishers) and shows some age.

Scott previously bought and sold original comic art since the early 1980s, but "gave it up full time in 1995 to work in comics publishing."
While we were on eBay, we also came across seller "alanb1109", who regularly sells copies of Eagle and has announced he is about to offer quite a substantial collection in coming weeks.

Could be worth keeping an eye on.
• View The Phantom Fleet art here on eBay