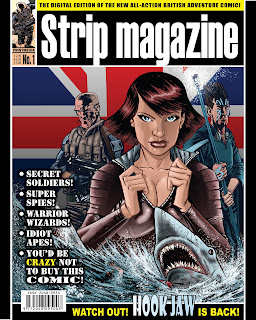 STRIP Magazine Issue 1 may not be on sale in good UK comic shops until next week (Wednesday 2nd November) but the digital edition - which has the same cover price but obviously doesn't include the giveaway Mirabilis poster - is on sale now as an iPad comic.

The digital edition is the result of a partnership between new graphic novel and magazine company Print Media Productions and Britain's mobile comic publisher ROK Comics. The first issue is now available worldwide for iPad from the Apple iTunes store (the print edition is only available in the UK).

Offering a range of strip stories, comics news, interviews and features, plus a fully re-mastered version of the classic British comic strip Hookjaw, this is a first issue you will not want to miss!

ROK Comics partnership with Print Media Productions is one of several new agreements with comics publishers and comic creators. These include the release of an iPad edition of The Iron Moon, a steampunk graphic novel created by acclaimed film writer Stephen Walsh and veteran British artist Keith Page. A special 'prequel' strip for The Iron Moon appears in STRIP Magazine #1.

ROK Comics recently launched its first fully originated comic, TEAM M.O.B.I.L.E. which is initially being published as a weekly web comic (at http://www.theteammobile.com/), followed by roll out on iPad and other devices.

Further iPhone and iPad apps, working with a number of different publishers, are in development.


As STRIP Magazine's editor, I'm delighted that thanks to the iPad, we're able to offer STRIP Magazine worldwide (thanks also to the creators who feature for their support). This is our first stab at a digital version of the magazine and we're hoping that later issues will take further advantage of the opportunities offered by the iPad platform.
• STRIP Magazine #1 can be downloaded at: http://itunes.apple.com/gb/app/strip-magazine-1/id474222695?mt=8