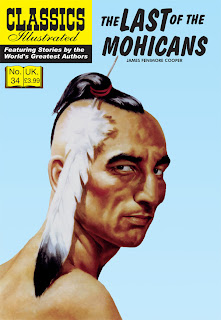 BBC Radio 4 FM are broadcasting a 30 minute documentary looking at seventy years of the American comicbook series Classics Illustrated on Tuesday 25 October 2011 at 1130.

As the first issue, The Three Musketeers, was originally published in October 1941 and actor Bill Paterson presents the documentary marking the 70th anniversary of the series with contributions from Professor John Sutherland and British bookseller Jeff Brooks who revived the title in the UK using the original artwork.

The UK Classics Illustrated comics are published by Classic Comic Store and the current issue is number 34, an adaptation of James Fenimore Cooper's The Last Of The Mohicans, which is available in WH Smiths, Easons and other high street newsagents.

There are more details of the BBC Radio 4 FM documentary on the BBC website and we would expect it to be available on the BBC iPlayer after broadcast.

There are more details of the modern British publications of Classics Illustrated at the Classic Comic Store website.

You can read an interview with Classics Illustrated publisher Jeff Brooks on the downthetubes main site.
Posted by Jeremy Briggs at 7:00 am