New Merlin magazine out today in the UK 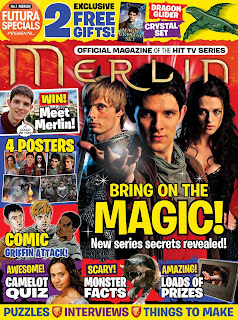 (Updated 19/9/11): Well, here's a title many people thought should be out there but never thought we'd see: an official Merlin magazine, complete with its own official comic strip.

Children's Publisher Attic Brand Media launches The Official Merlin Magazine today, 9th September. Retailing at £3.20 per issue in the UK (the magazine is available worldwide from its official web site), it's the first magazine in the new monthly Futura Specials series from the company, a range which also includes the football-themed posters and puzzles magazine, KiCK! Extra, and the games and entertainment title, Kraze Club.

"It will be a magical treat for boys and girls aged seven to 14 (and a guilty pleasure for all those Merlin fans who are that little bit older!)," the PR proclaims.

Launched in 2008, the Merlin TV series tells the story of young Merlin in Camelot, as he comes to grips with his powers and destiny. Merlin's success and popularity continues to flourish across the globe.

FremantleMedia Enterprises, which has invested in the fifth series of the drama alongside UK broadcaster, BBC One, has now sold Merlin to over 50 broadcasters in more than 180 countries. The fourth series of the fantasy drama will begin in Autumn 2011 on BBC One in the UK. The third series, which was broadcast in winter 2010 pulled in the highest UK ratings for the drama so far, with a weekly average of over six million viewers.

Several publishers have previously pitched for a license for the Magazine, and samples designs and strips materials were created by Interzone illustrator Smuzz for one dummy. But it's Attic who have grabbed the crown and produced the Magazine. 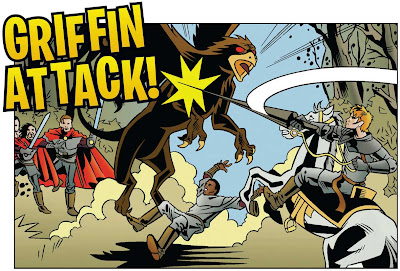 The new Merlin magazine looks as though it wlll follow the same format as Doctor Who Adventures, published at present by the BBC, with with puzzles, quizzes and competitions and, most importantly for downthetubes fans, an exclusive Merlin comic strip, written by Damian Kelleher and drawn by Lee Carey, whose credits include various strips for Panini UK including Spider-Man and Friends. 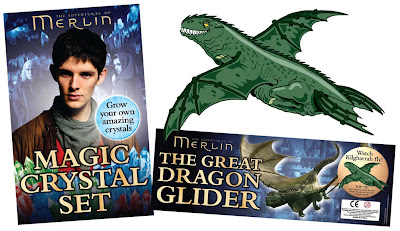 The first issue will come with two high-quality gifts - a Magic Crystal Set and The Great Dragon Glider toy.

"The new magazine will be a fantastic opportunity for fans to get a glimpse into the world of Merlin, while having a lot of fun!" says the show's executive producer, Johnny Capps.

We wish Attic Brand Media every success with this project - it's great to see Merlin on our appear on our newsagents shelves at last.

• Official website to buy the Merlin magazine: www.subscribeonline.co.uk/merlin/
The magazine is available to buy worldwide from this website.

• BBC Merlin site: www.bbc.co.uk/merlin
Posted by John Freeman at 7:11 am

I'm very pleased about this. (Any and all opportunities for comic strip creators to find work should be celebrated. Here's hoping the mag lasts!)

Although this went on sale last week, I've not actually seen a copy in the shops but I have been sent a copy and it's great for younger fans of the show. Format wise, it's similar to Doctor Who Adventures and includes picture-led features on the show, puzzle pages, Things To Do (the magic tricks page is fun) and a short comic strip. I have to say that the Dragon Glider didn't test very well - our cats were most disappointed by the short flight span. Not tried growing the 'magic crystals' yet! At £3.20 it's on a par price wise with a lot of other bagged comic magazines - I just wish there was more comic strip. But then I would say that!

How on earth do we get Merlin Magazine issue 2? It seems to have completely disappeared

I have also been searching for issue 2 of the magazine. One of the sites I have been to says that it will be released on around the 24th. I hope that this is true because I really want to carry on getting this magazine.

I've been looking every day for issue 2, but no luck. I have read somewhere that they were having problems with it. I just hope it comes out soon, I would really like to get it.

I've just been on the phone to the publishers, only to be told that they are not making it anymore!

The publisher went into administration early last month - I'm told someone has picked up the Merlin license, so we'll have to wait and see what happens next. More news as I get it...

At least it will return

I have got the merlin magazine issue 2 I got it from asda yesterday for £3.99 which is a bit more than the first issue, but it is rather good. I was so annoyed when they said they were not making it anymore, so glad it's back :)

I got the second issue yesterday also from W H Smiths (my daughter so happy) although it says its issue 19 it is definately issue 2 with the badges and keyring etc that was advertised in issue 1...it is from titan magazine

Despite the confusing issue numbers, Feb 2012 issue is the second official Merlin magazine. Despite the slightly different cover, Titans Issue #4 is a reprint of the first issue. Very pleased to see it return with similar high quality of content. The website is here:
http://titanmagazines.com/t/totally/uk/

Thanks for the latest info, velasquez42! News story here: http://downthetubescomics.blogspot.com/2012/01/will-merlin-magazine-return-again.html. You've cleared up some confusion on this.