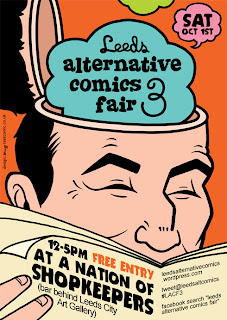 The 3rd Leeds Alternative Comics Fair will take place on Saturday 1st October, in A Nation of Shopkeepers, Leeds, just behind the Leeds City Art Gallery.

In keeping with previous events, this small but perfectly formed event hopes to bring you some of the best Northern, alternative comics makers, print-makers and illustrators, who will be selling their wares in the quirky, relaxed bar on Cookridge Street.

Don’t like comics? (Surely not! Did you think this was a surfing web site for some reason?) Well, there’ll be lots more on offer, such as craft wear, badges, art and music.

The Fair is also reintroducing the communal table, giving non-exhibitors the chance to bring their comics along to sell. All we ask is that you help man the table for a short period of time.

• The event will run from 12 noon until 5pm and is free to enter. Get along, have a browse, a chat, a drink and a fish finger sarnie! More info: http://leedsalternativecomics.wordpress.com, Facebook search “Leeds Alternative Comics” or tweet us @leedsaltcomics
Posted by John Freeman at 7:45 pm