In Review: Darwin's Diaries - The Eye Of The Celts 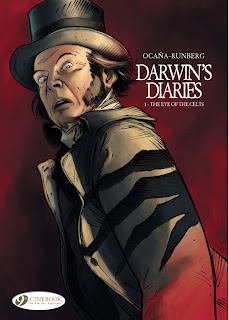 From the writer of the science fiction series Orbital, Sylvain Runberg, comes the start of a new series from Cinebook, Darwin's Diaries. With art from Eduardo Ocana and colours from Tariq Bellaoui, the first diary entry is The Eye Of the Celts.

It is 1860 and naturalist Charles Darwin has achieved notoriety with his publication on evolution, enough that when a mysterious creature attacks workmen constructing a new railway in Yorkshire, Darwin is summoned to the Prime Minister and offered a lot of money to investigate. With Suzanne Dickinson, the daughter of the landowner where the attacks have taken place, Darwin begins his investigation of a clawed beast that is fast, strong and very vicious, cutting both men and horses to pieces and that appears to be unknown to science. 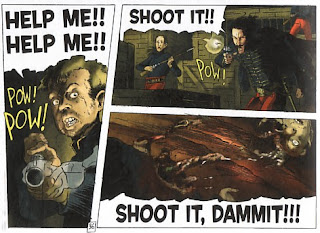 This is a very new book having only been published in France in 2010 as Les Carnets De Darwin - L'Oeil Des Celtes and, like Runberg's Orbital tales, it is a two parter story so the tale is not complete in this book. However the second book, Death Of A Beast, has already been published in France and is due next year in English so there is not long to wait for the conclusion.

Runberg takes the reality of the time and gives it a slight nudge to one side, taking it to a place similar to where, for instance, Queen Victoria was chased by a werewolf in Torchwood House. This is an intriguing story with a slow build up as the danger from the creature is spelled out and we discover Darwin's interest in cryptozoology which then leads us on to Yorkshire and the strong female character of Miss Dickinson. The quiet thoughtfulness of the investigation is punctuated by the sudden and violent attacks of the creature, while other plot threads such as the druid travellers, perhaps the reason for the book's title, and Darwin's nocturnal escapade are left hanging to be hopefully resolved in the second part.

The plot is complemented by Ocano's moody artwork which, along with Bellaoui's sensitively dark colours, make for a book that impresses at first glance before even reading any of the text. However it is worth pointing out that Cinebook list it as a 15+ title and it is certainly a graphically gruesome book dwelling as it does on the remnants of the creature's victims as Darwin and Miss Dickinson discuss the case.

Runberg displayed his story telling ability in the Orbital books and Darwin's Diaries - The Eye Of The Celts shows that he is equally at home in the past as the future while Ocano's moody artwork does much to enhance the mood of the story. This is an impressive start to a new series and I look forward to the second and concluding part of the story.

• There are more details of Darwin's Diaries on the Cinebook website.

• There are more details of the French Darwin's Diaries books, Les Carnets De Darwin, on the Le Lombard website (in French).