In Review: Orbital - Nomads and Ravages 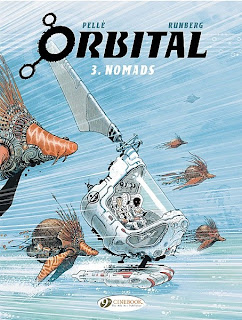 Orbital is Cinebook's longest running science fiction series after the Worlds of Aldebaran books and which, like the Largo Winch books, tells each story over two books. The second pair of Orbital books, Nomads and Ravages, originally published in 2009 and 2010 bring this series by writer Sylvain Runberg and artist Serge Pelle up to date in with all four French albums now having been translated into English.

In Nomads a galactic celebration of the ending of the Human/Sandjarr war is due to be held in Kuala Lumpar and Interworld Diplomatic Office (IDO) agents Caleb from Earth and Mezoke from Sandjarr have been assigned to oversee security for the celebrations. After an incident between local Malaysian fishermen and the nomadic alien Rapakhun, tensions rise but there is also something that is killing people and aliens alike and no one knows what it is. In Ravages the fatal contamination moves from the swamps into the city and Caleb and Mezoke can only prove the innocence of the Rapakhun in the mounting death toll by finding out exactly what is causing the mysterious deaths. 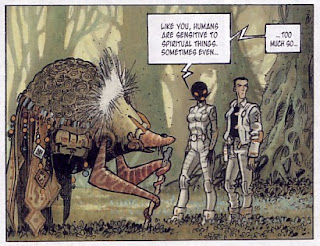 The original pairing of Orbital books, Scars and Ruptures, felt somewhat derivative - the pair of intergalactic diplomatic police officers being reminiscent of the Jedi pairing in The Phantom Menace, who were sent to a human colony world overrun by innumerable vicious creatures being reminiscent of Aliens. While the Confederation and IDO's political intrigue still feels like the Republic and Jedi from the newer Star Wars movies, this pair of books feels much fresher with the Indonesian setting feeling almost as alien at times as some of the alien races that have come to Earth. 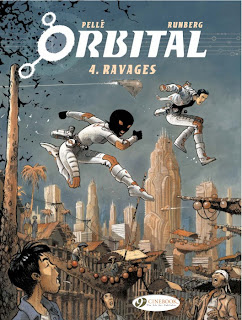 Runberg's plot initially sets off in the expected direction before taking a few twists plus a major excursion off-world before presenting an alien menace that would have many artists cap their pens in despair at its lack of visual identity. This is a menace that is shown on the cover of the second book, but the reader will probably not even notice it without having read the story first.

Yet it is Pelle's alien creature designs that are the standout for me in these books, the Rapakhun in particular. The cover for the first books with its IDO flyer surrounded by flying Rapakhuns is striking in its simplicity while the second cover is more figurative, showing a scene that isn't technically part of the story, but still remains an attention grabber. Pelle's muted colour art is a delight to look at throughout the two books from the stark clean lines of his cityscapes via the dynamic ocean chases to the moody gloom of the jungles.

Orbital's combination of diplomacy and adventure in Nomads and Ravages may not be quite to everybodies tastes, but the mixture of alienness and familiarity in Runberg's story combined with Pelle's lovely art make this mission in the series well worth a look.

There are more details of all the English language Orbital books on Cinebook's website.

There is more information on the original French language Orbital books on Dupuis' website (in English).