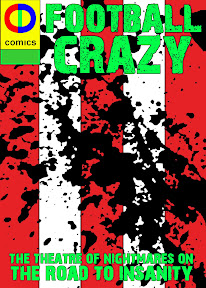 Following up on the success of their digital comics Meadowhell and The Attercliffe Prowler, Sheffield-based independent comic company CDComics has produced the third in their local horror series.

“I’m sort of on a mission to make Sheffield into Britain's Salem.” says writer-illustrator Craig Daley.

CD Comics are exactly that – comics/graphic novels on CD rather than paper, to read on your PC or on various other devices. Each CDComics release has more than 50 full colour pages.

Their latest horror tale - Football Crazy - is a 66-page full colour graphic novel available in two versions, Red or Blue. A reader can follow either Sheffield Wednesday or United on an eventful FA Cup run, so if you support either the Blades or Owls you have a choice of stories.

“Football Crazy is Roy of the Rovers meets Frost, but set in The Twilight Zone," Craig says. "It’s for football fans with a sense humour, who like a ‘whodunnit’ and all the clues are in the comic, but I’m hoping I keep the reader guessing until the last few pages.”

"The story starts with a FA Cup Third Round Replay and Steel City Derby, covered by Radio Sheffield," says Craig. "The victorious Sheffield team go on to meet Manchester United in the Forth Round, but then the bizarre and macabre nightmare begins.

"One of the Sheffield players is murdered in strange circumstances and the police, led by D.I Charlton must find out who the killer is and why they killed a footballer." 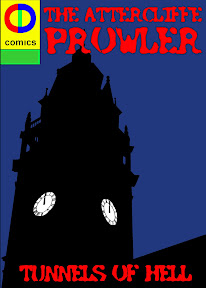 The story has plenty of twists and turns, and, just like previous stories features plenty of Sheffield locations, including the Police Station in Attercliffe, Heeley Baths, Manor Lodge, the Moor and also visits several of England ’s larger football stadiums.

There are cameo appearances from the Look North team, Harry, Christa, Tanya and Paul the weather man, along with other famous faces like Jim Rosenthal, Alan Davies, Robson Green, Stephen Fry and the Chuckle Brothers.

Thanks to its local links the project has already attracted local press attention, just as other locally-based titles have done (Bryan Talbot's Alice in Sunderland being a leading example). That will surely help boost local sales, which can be a boon to smaller independent press publishers.

All CD Comics are available at four Sheffield Retailers at the Wicker’s Sheffield Space Centre, Broomhill’s Galaxy 4, Blackwells on Carver Street and Rare and Racy on Devonshire Green, for £2.50. To order online go to: http://www.space-centre.co.uk/