In Review: The League of Extraordinary Gentlemen - Century: 1969 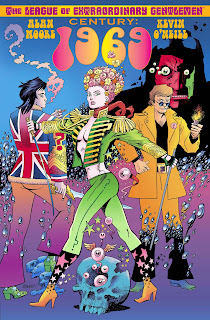 
The Book: The second volume detailing the exploits of Miss Wilhelmina Murray and her extraordinary colleagues. Volume two takes place almost 60 years after the events of Century: 1910, in the psychedelic haze of Swinging London in 1969 - a place where Tadukic Acid Diethylamide 26 is the drug of choice and where different underworlds are starting to overlap dangerously to an accompaniment of sit-ins and sitars.

The Review: Before you do anything else, I strongly recommend going back and reading Century: 1910 before you begin 1969. While this fantastic new League story - described by Moore himself as a critique of culture - can be read on its own, there is plenty of set up in 1910 that impacts on this one, as Mina and her much-reduced League set out to foil the villainous Haddo's plot for world domination.

In this new adventure, peppered with some wonderful contemporary visuals, the vicious gangster bosses of London’s East End find themselves brought into contact with a counter-culture underground of mystical and medicated flower-children, or amoral pop-stars on the edge of psychological disintegration and developing a taste for Satanism. Alerted to a threat concerning the same magic order that she and her colleagues were investigating during 1910, a thoroughly modern Mina and company attempt to navigate the perilous rapids of London’s hippy and criminal subculture, as well as the twilight world of its occultists.

Starting to buckle from the pressures of the twentieth century and the weight of their own endless lives, Mina and her companions must nevertheless prevent the making of a Moonchild that might well turn out to be the antichrist.

It's a fine, if increasingly downbeat and disturbing tale, as, once again, the League find their foe a tough match - Haddo's torment of Mina on the astral plane at the climax, for example, matched by an equally disturbing treatment of her body by an 'admirer' as she battles for survival. As ever, we're treated to a multi-layered, finely told adventure, complemented by superb art from Kevin O'Neill - indeed, as Moore himself has said, one of "the finest and most distinctive comic book artists this country has ever turned out".

As with Century and other League volumes, the story unfolds against a backdrop of all things 1960s - and there is plenty throughout to catch the eye marking that decade. My favourite are probably panel at a petrol station, featuring a car smash involving The Saint and James Bond as Parker from Thunderbirds looks on, along with cameos from Garth, Andy Capp and Flo as Mina re-encounters the mysterious time-jumping Norton.

In terms of 'incidental' (and some not so incidental) characters to enjoy, who could fail to enjoy appearances by Jack Carter, of Get Carter fame and a number of surrogate Krays.

League of Extraordinary Gentlemen - Century: 1969 is another fine feather in the cap of Messrs Moore and O'Neill, who have already revealed the adventure will come to a head, at some point and in their own time, in another quality volume.

Plus, there may still be more stories to follow... but we'll just have to wait and see!

• With help from Moore expert Pádraig Ó Méalóid, Jess Nevins has already posted up an online set of annotations to the brand new League of Extraordinary Gentlemen Century: 1969. If you're in a hurry, you could also read the Newsarama 1969 Cheat Sheet, compiled with Jess Nevins help

• The Guardian: Alan Moore: an extraordinary gentleman – Q&A
Moore discusses the evolution of modern culture, leaving his characters in the lurch and how tablet computers will transform the language of comics. He also hints that he's looking at digital comics storytelling, and thinking about how to apply his script writing to comics specifically created for this medium.

• Wired: Alan Moore Takes League of Extraordinary Gentlemen to the ’60s
Visionary comics writer Alan Moore has largely migrated beyond the madness of the faltering comics industry, which is being overshadowed by film and television at Comic-Con International. But, lucky for us, not entirely.

• Good Comic Books
"In the books out of body conclusion, I almost had to check that nothing had slipped into my own drink, O’Neill warps and distorts the usually geometric panels and basically displays an out of body experience as one long acid trip, it’s nuts!"

• i09
"O'Neill delivers his master class in acid trip visuals, and if you dug Black Dossier, you'll love this."
Posted by John Freeman at 1:47 pm