Gosh! Comics Moves home - but not before one mega Alan Moore signing 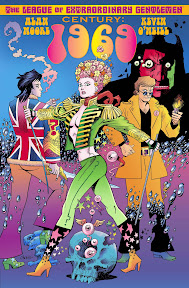 Top London comics store Gosh! Comics have outgrown their happy home of 25 years close to the British Museum and are moving to new, bigger premises in Soho. But, before they go, they’re saying goodbye to 39 Great Russell Street with a huge signing on the 30th July with Alan Moore and Kevin O’Neill celebrating the release of their highly-anticipated League of Extraordinary Gentlemen: Century 1969, published by Knockabout Comics.

Century 1969 takes place almost sixty years later than the previous story, in the psychedelic daze of Swinging London during 1968, a place where Tadukic Acid Diethylamide 26 is the drug of choice, and where different underworlds are starting to overlap dangerously to an accompaniment of sit-ins and sitars.

The vicious gangster bosses of London’s East End find themselves brought into contact with a counter-culture underground of mystical and medicated flower-children, or amoral pop-stars on the edge of psychological disintegration and developing a taste for Satanism. Alerted to a threat concerning the same magic order that she and her colleagues were investigating during 1910, a thoroughly modern Mina Murray and her dwindling league of comrades attempt to navigate the perilous rapids of London’s hippy and criminal subculture, as well as the twilight world of its occultists. Starting to buckle from the pressures of the twentieth century and the weight of their own endless lives, Mina and her companions must nevertheless prevent the making of a Moonchild that might well turn out to be the antichrist.

Joining Moore and O’Neill on the day is British comics mainstay Gary Spencer Millidge, known for his award-winning self-published series Strangehaven. Millidge will be signing copies of his new book, Alan Moore: Storyteller, the most comprehensive and accurate biography of one of Britain’s most creative minds ever published. It’s a lavishly designed 320-page illustrated hardback with a cover by Chip Kidd, a wealth of unpublished material, a foreword by the great Michael Moorcock and even an audio CD. You can catch a sneak preview over at Millidge’s blog.

Get your pre-orders in now for the League of Extraordinary Gentlemen Gosh! Exclusive Bookplate Editions and you can pick them up on the day.

Gary Spencer Millidge, author of the astonishing and highly recommended Alan Moore: Storyteller (on sale now in all good bookshops - review soon!) will be signing from 12pm until 1.00pm, with Moore and O’Neill to follow at 2.00pm until 6.00pm.

Visit the hallowed Gosh! basement and fall down the infamous spiral staircase for the very last time!


• More information at: http://www.goshlondon.com/​events/
Posted by John Freeman at 1:15 pm