David Baillie's date with Terror (Tales, that is)

Writer/artist David Baillie has been a stalwart of the British small press scene for some time, self-publishing his comics to sell online and at conventions. More recently, though, he’s moved into professional comics writing.

This week, his new Terror Tale is published in 2000 AD (Prog #1737) so Matt Badham thought it was a good time to sit down and have a chat with him.

This interview is crossposted from Matt's blog with his and David's kind permission...

Matthew Badham: What tips have you got for those trying to write one-offs, Terror Tales or Future Shocks, for 2000 AD?

David Baillie: Well first off – I’m not claiming to be an expert. Also bear in mind: man cannot know the mind of Tharg. But I do have some thoughts on what makes for a good Future Shock/Terror Tale-style story, based on lessons I’ve learned personally and stuff I’ve observed in the work of others. (For starters, don’t begin sentences with ‘But’.)

Also, read outside of the genres – Saki, O. Henry and definitely The Dead by James Joyce. All of these guys wrote (or write) engaging short fiction with great central premises and non-ambiguous resolutions.

I suppose what I’m saying is make sure your story is engaging, has a great central premise and a resolution that isn’t ambiguous. And learn from the best. You only have four pages to tell your story so every panel has to do a job. Avoid repetition where possible. And make sure your character clearly wants something.

What was it like discovering that your new strip has been illustrated by Jesus Redondo?

David: Tharg told me who had drawn Birth of the Mazzikim at the Eagle Awards a couple of weeks ago and I was honestly dumbstruck. My ambitions in comics break down into three categories – things I hope might happen one day, things that are now impossible for some reason (I always wanted to do a signing at Comic Showcase on Charing Cross Road, but it’s now closed) and things that are so improbable that I hadn’t even contemplated them.

Having a legend like Jesus Redondo draw a story I wrote for 2000 AD is a firm #3. The man is a legend – among his many credits, he drew some of Alan Moore’s most well-remembered Time Twisters, The Mind of Wolfie Smith and M.A.C.H. 1. Stories I read again and again when I was growing up (in reprint – I’m not that old!) It’s even more incredible that the artwork for the story is as good as it is.

According to Wikipedia, Mr Redondo is now in his late seventies, but he draws like a hungry young whipper-snapper. It’s amazing. His storytelling is still world-class and, as Henry Flint said on Twitter the other day, if anything his work is tighter now than it was a couple of decades ago. I’ll go back to being dumbstruck now. 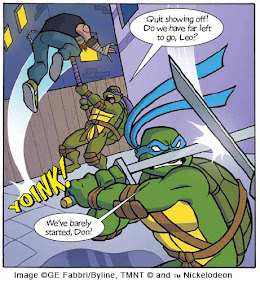 You’ve also written Teenage Mutant Ninja Turtles (TMNT) for the Russian market. These are two-page strips. What are the challenges there?

David: That’s been one of the most fun gigs ever. I’m the right age to have been knocked off my feet by the mega-franchise that is the Teenage Mutant Ninja Turtles the first time around. Then I became obsessed with ninjas and eventually tracked down the original black and white indie comics – so I’m a genuine fan.

The TMNT comic I’m working on is for younger readers and, like you said, the stories are all two-pagers. It’s a really interesting challenge to tell a story in that small a space. Introducing a problem, escalating it and then resolving it in a surprising way in around ten panels is a tall order and I’ve had to find new writing muscles that I didn’t even know existed.

On top of that, I have a bee in my bonnet about how a lot of boys’ fiction resorts to using violent resolutions. ‘Might makes right’ is a terrible lesson to be repeating so often. So yeah – when I remove that option it gets even more difficult, but also much more rewarding when it works.

Matthew: What other comics projects — or other projects — do you have on the go at the moment?

David: I think my next comic from the House of Tharg will be in the Megazine, but I know he has no qualms about decommissioning leaky droids so that’s all I’ll say. Apart from that, I have a few projects that are boiling away in the background. I wrote a radio play for Radio 4′s Afternoon Play slot last year, but the producer was let go in the big BBC reshuffle and I haven’t found a new home for it yet. I’m hoping to start work on something for BBC Scotland in the not too distant future.

I’ve also co-written a film script with fellow comics outcast, Dan Lester, and we’re going to start punting that around soon. My comics work is all on spec at the moment, so I probably shouldn’t mention it before I’ve even pitched.

Matthew: You’ve got quite a history of being involved in small press comics. Where can people get your small press stuff and do you have any plans in the near future in that arena?

David: I’ve been remiss is keeping my small press work in stock, unfortunately. Anything that doesn’t pay the rent has fallen by the way-side a little in the last couple of years.

In saying that, I do have copies of my fantasy graphic novel Tongue of the Dead and the excellent BASTARDS anthologies*. They can both be bought using the paypal buttons on my website or emailing me at [webhello at davidbaillie dot net].

I’d love to get back to doing small press work – it’s really liberating knowing that, as your own editor, everything in your head will be making it on to the page no matter how weird, personal or surreal. I suppose it’s just a matter of squireling away some cash and setting aside some time. I’m really lucky, though, that at the moment my main gigs are all things I’m really passionate about and it all feel like my own work.

Thanks to David for taking time out to talk to me. His website can be found here.

*Note from Matt: Tongue of the Dead and the BASTARDS anthologies are great, with the latter being especial favourites of mine. 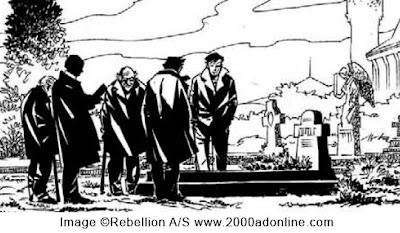