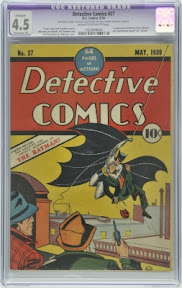 Rare and much sought-after US comics, including Detective Comics #27, featuring the first appearance of Batman, will go under the hammer in Gloucestershire next week.

The auction of US comics from a ‘one owner’ collection will take place on Thursday 16th December 2010 at Dominic Winter’s UK auction rooms in association with Comic Book Auctions.

Over 2,500 comics in 200 lots are on offer, perhaps the most important collection of American comics ever offered outside the US.

Included in the auction is Detective Comics #27, dated May 1939 (which recently sold for $1 million in New York). The first appearance of 'Bat-Man' is listed as CGC Apparent 4.5 [vg+], restored, cream to off-white pages. Notes on the lot indicate it has had professional restoration that includes: colour touch, pieces added, tear seals, cleaned, re-inforced, re-glossed.

Also on offer among the many comic lots are Batman #1, Superman #1, Superboy #1 and #2, issues of Marvel's Amazing Spider-Man, Avengers, Fantastic Four, Hulk, Journey Into Mystery, Iron Man and X-Men #1 - plus Mile High copies of Crime And Punishment #1-5. Many of the comics offered are with CGC grading.

Full details of the lots can be found here on the Dominic Winter Auction Room web site.

The US comics on offer are part of a much larger auction that also includes rare antiquarian and juvenile books, bygone toys (including Disney toys), Louis Wain postcards, a huge collection of the works of crime writer Edgar Wallace (who was also the co-creator of King Kong), first edition books, including many James Bond hardcovers, film posters (including 2001: A Space Odyssey and Goldfinger), plus many Disney figurines and serigraphs.

• Bidding can be done online, via telephone or in the auction rom. For full details please check the website www.dominicwinter.co.uk or call on 01285 860006