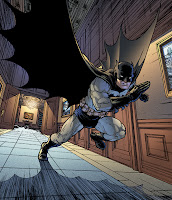 As we previously reported, The Comic Book Alliance - “The Voice of the British Comics Industry” - are offering comic fans some very special Christmas treats this week with their very first fundraising auction — including the chance to star alongside Batman in his new comic, Batman Inc; along with other experiences that money can’t buy!

The auction has proved to be so popular that the CBA have extended the auction by 24 hours so that fans can get in those last minute bids for some real bargains!

“We’ve been overwhelmed by the bidding and response to the auction," says CBA Chair Tim Pilcher, "but it soon became apparent that there are still a few people out there who haven’t heard about the auction, and we wanted to give them that extra chance to get a really special Christmas present for themselves or a loved one.

"This being our first auction we have, naturally, had a few teething problems, but we can assure all US bidders that all the items listed are available to American fans as well. Simply contact us via eBay.co.uk and we will ensure you can take part in this exciting event.”

Grant Morrison (the award-winning writer who killed Batman and resurrected him!) will write the winning bidder into an issue of Batman Inc. featuring their name and likeness, courtesy of DC Comics and Frank Quitely (All Star Superman, Batman & Robin), winner of four 2010 Eagle Awards and one of the hottest artists in comics, will draw a personalised portrait of a winning bidder.

Plus, as we reported with a full list of lots here, there are dozens of signed books, comics and graphic novels from high profile creators like Alan Moore (Watchmen), Garth Ennis (Preacher, The Boys), Charles Vess (Stardust), and John Wagner (Judge Dredd).

There are no reserves, and all bids start at just 99p, so there’s the chance to pick up some real Christmas bargains for the comic fan in your life!

• Further details on auction can be found at: www.eBay.co.uk: search for the seller, comic_book_alliance or at www.comicbookalliance.co.uk.
Posted by John Freeman at 1:57 pm