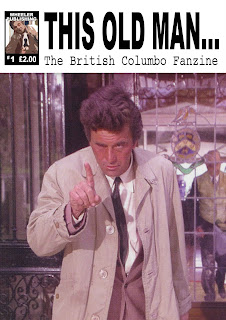 downthtubes contributor Ian Wheeler is hoping to launch a new fanzine based on the hugely successful American detective show Columbo which continues to be popular on both sides of the Atlantic - and, while we'll admit there's only a tenuous connection with comics, the show was  parodied in MAD and Cracked, so we're happy to plug his plans here.

Ian's last fanzine, Eagle Flies Again, co-produced with John Freeman, covered the wide topic of British comics (with a bias towars Eagle and Dan Dare) and met with some success - it was twice nominated Fanzine of the Month in SFX Magazine.

"Columbo is equal in my affections to Doctor Who," says Ian, a former Coordinator of the Doctor Who Appreciation Society.

"Although there is a terrific fan website about the show, I can't find any evidence of there ever being a fanzine. I'd like to rectify this.

"With constant repeats, the recent UK stage show (which is reteruning in 2011) and a new short story collection, the time is right. I'm therefore hoping to launch This Old Man - the fanzine of Columbo. We'll start modestly - it's likely to be a photocopied affair and, like any fanzine, contributors will not get paid. But hopefully it will be fun to do and fun to read.

"Although many printed fanzines have long-since vanished to be replaced by internet-based content, there are still many people who prefer to actually hold something in their hands they can read and there appears to be a minor revival of A5 photocopied zines, particularly based on Doctor Who."

Please note: the cover shown is provisional.
Posted by Ian Wheeler at 11:33 pm