Burke and Hare first editions on sale from creators 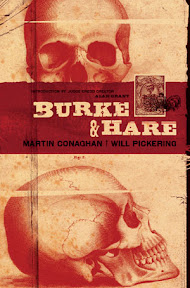 With the news that Insomnia Publications, the company behind graphic novel Burke & Hare, has ceased trading, its creators Martin Conaghan and Will Pickering can now offer out copies for sale of the first edition of the book.

"Will and I are in the process of negotiating a deal with a new publisher," says Martin, "which will necessitate a new cover and some amendments/additions to the book in the second edition. This means the first edition will never be seen in print again in its current form.

Fortunately, I have around 300 copies that were sent to me by the Insomnia distributor when the company landed in financial trouble."

Burke & Hare delves into the  12-month period from 1827-1828 in Edinburgh, Scotland, when two Irishmen by the names of William Burke and William Hare murdered 16 people and disposed of their bodies to the eminent dissectionist Dr Robert Knox.

The price of the book is £10+£2 P&P. if you live in the UK. If you're outside of the UK, contact Martin via sales@burkeandharecomic.co.uk and he will give you a price on postage.

• If you want a copy, you can send Martin the money via PayPal to sales@burkeandharecomic.co.uk and he will get it sent out to you as soon as possible.

Thanks for letting us know John. I'm on way to PayPal now!