UK Comics Undercover In The USA 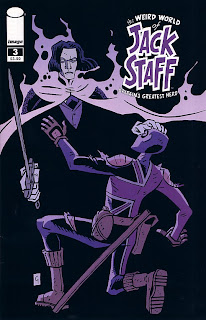 In the week that the USA sent back ten Russian agents who had been living undercover in the USA, two British comics that operate under the cover of American publishers have arrived on our shores.

First is Paul Grist's The Weird World of Jack Staff and this third issue of the third generation of Grist's tribute to old British anthology comics and their characters even comes with three staples. Tom Tom The Robot Man, who is really a little girl called Trisha, appears to save builder John Smith, who has forgotten that he is Jack Staff, from the Skull whilst Professor Fate looks on before he goes to visit Morlan The Mystic. Grist's Jack Staff can take a little getting used to, between the stylised art and the anthology style storyline, but it definitely rewards those who stick with it. 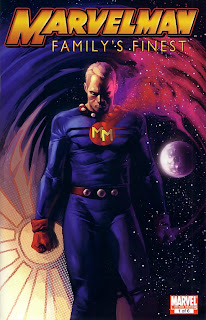 Also available is the first of Marvel's use of the old L Miller and Sons character of Marvelman. The first part of a six issue limited series entitled Marvelman Family's Finest, the 44 page comic reprints four individual stories, one from each of the Marvelman characters and a combined one, plus the start of a serial featuring just Marvelman. All the stories are in their original black and white and, other than the glossy cover, the comic is printed on newsprint paper. With all the stories credited to Mick Anglo, the artists are Trigan Empire's Don Lawrence as well as Norman Light, George Parlett and Mick Anglo himself. Art-wise Lawrence's two strips are nice but the best must be Norman Light's 1957 Marvelman And The Acid Vapour despite its ridiculous plotline - and perhaps that is the main problem with these old Marvelmans. 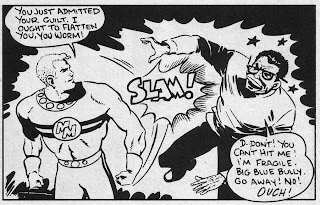 Much had been said on the subject of Marvel reprinting Marvelman. The vast majority of fans want the Warrior/ Miracleman version of the character and are going to have little interest in childish storylines and variable artwork from the mid 1950s which is what is available here. It will be interesting to watch the sale figures for this six issue limited series as I suspect that while the first will be purchased out of curiosity, there will be little here to draw many readers back for the next five issues.

• The Weird World Of Jack Staff is published by Image with a cover price of $3.50.

• Marvelman Family's Finest is published by Marvel with a cover price of $3.99

• Read Lew Stringer's review of Marvelman's Family's Finest on Blimey! It's Another Blog about Comics
Posted by Jeremy Briggs at 11:38 am

You hit the nail in the head, People want to see the conclusion of 'The Silver Age' and the rumoured finale to Neil Gaiman's trilogy 'The Dark Age' which, it is said, would have seen the return of Johnny Bates and the end of Marvelman's Utopia.

I've read a few old Marvelman stories and they're pretty bog-standard '50s fayre. Once you've read a couple that's all you need, the character never develops, just continues to fight Gargunza in ever more ridiculous circumstances.