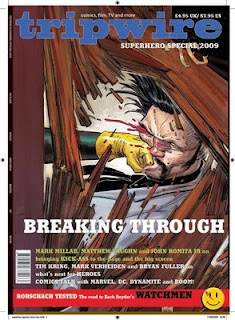 Editor and publisher Joel Meadows kindly sent us a copy of the Tripwire Superhero Special, which is now on sale in all good comic shops, Borders UK and Barnes & Noble in the US.

Building on the fine work that went into last year's Tripwire Annual, this time round the focus is costumed heroes and the magazine is packed with exclusive interviews with creators such as Mark Millar and Matthew Vaughn (talking about the Kick-Ass movie and comic - John Romita Jr also talks about designing the Kick-Ass characters), Paul Cornell (on Captain Britain), Geoff Johns (on his work on DC Comics Flash and the upcoming DC Universe game) and much more.

Highlights for me are the Cornell interview, a creator I've worked with in the past on Doctor Who Magazine and who always offers an interesting insight on his approach to writing. The feature includes an admittedly short overview of Captain Britain's history which thankfully notes the contributions to the character of creators other than Alans Moore and Davis.

Also of note is an excellent interview-feature with Tim Kring, Mark Verheiden and Bryan Fuller on their plans for TV's Heroes, which was recently re-commissioned, something Kring was unsure of at the time the feature was compiled, and he offers an interesting insight into the state of US TV at present. "Things change so quickly and the American networks are in a real transition period right now," he says. "Right now, nobody knows if there's going to be a network in a year!"

Printed on high quality paper with a wealth of impressive visuals, this is again an impressive self-published title, well worth tracking down if you're looking for an entertaining "snapshot" of the state of the superhero comics genre.

While my feeling is that the design of this issue is less polished than last year's Annual, and in places, some of the subbing is a little off -- not that I can talk, the way I miss words out of articles! -- this Tripwire Superhero Special is another labour of love from Joel and his team and features such as "15 Important Graphic Novels Ever" are worthy of attention and discussion.