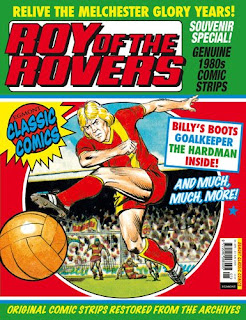 (Updated 30 March) Back in the good old days of British comics, eager readers of titles such as Valiant, Battle, Buster, Roy of the Rovers and others didn't just enjoy their weekly publication; sales and distribution models of one off magazines were very different, enabling publication of Special issues - usually in the Summer and Winter - along with hardback Annuals, which were sold in both newsagents and bookshops.

Sadly, while many comics still have an Annual tie-in, the cost of publishing and promoting one-off Specials as comic sales declined became prohibitive, and the release of these 'holiday treats' became a thing of the past -- until now.

Egmont UK and WH Smith have teamed up to publish four "Classic Collections" -- special titles featuring archive material from Roy of the Rovers, Battle, girls comic Misty and Buster, bringing adventures from these classic comics back to the newsstand.

Compiled by former 2000AD editor Steve McManus, the Specials are bound to bring back many fond memories for today’s grown-ups who can relive the time when they waited eagerly for each new issue of these comics to go on sale.

Egmont acquired the Fleetway stable of comics, which included Roy of the Rovers, Battle, Misty and Buster in 1991 and have recently been making more of the massive archive of characters, reviving Werewilf for the upcoming TOXIC comic supplement (see news story) and working with publishers such as Titan Books to publish collections from their huge archive.

“We're delighted to be bringing this fantastic portfolio of comics back to the newsstand for the fans to enjoy and indulge in their nostalgic reading," says Tim Jones of Egmont UK. "These new launches are a great example of the huge portfolio of evergreen character comics, books and magazines Egmont publish, and we are thrilled to keep delivering content for their fans.”

• Roy Race, aka Roy of the Rovers, star player of Melchester Rovers and idol to millions, first appeared in 1954. His trademark “Racey’s Rocket” and knack for scoring match–winning goals made him a superstar long before today’s pampered Premiership stars. His footballing career lasted for many years, eventually ending in tragedy when a helicopter accident let to the amputation of his foot. Roy eventually graduated to his own comic which also featured such memorable stories as Billy’s Boots (reprinted in Striker), Hot Shot Hamish (which has recently been appearing in Scotland's The Sunday Mail) and Goalkeeper. More at the official web site: www.royoftherovers.com
• The Roy of the Rovers Special is scheduled for release on 1st April. 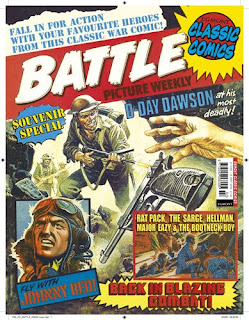 • Battle began life in 1975 and ran for 13 years. Filled with action-packed, thrilling stories mainly set during the Second World War, Battle fired the imaginations of countless boys, many of whom had a surviving relative from the war. From the exploits of the unconventional soldier Major Eazy to the realistic portrayal of World War 1 life in Charley’s War (currently being republished by Titan Books), Battle was the first of a new wave of British Comics that featured rugged realism from cover to cover and helped pave the way for 2000AD and Crisis.
• The Battle Special is currently scheduled for release on 24th June

• Buster ran for an astonishing 40 years between 1960 and 2000. It remains one of the most successful British anthology comics, combining comedy and adventures strip in one title, mainly for boys.
• The Buster Special is currently scheduled for release on 16th September.

• Misty, the barinchild of writer-editor Pat Mills and others, was a girl’s horror comic that ran from 1978 until 1984. Full of moody and sophisticated stories such as Moonchild and The Sentinels, it still has a dedicated following and is fondly remembered by fans. Official website: www.mistycomic.co.uk
• The Misty Special is currently scheduled for release on 9th December

• Priced at £3.99 each, the 52 page Classic Collections featuring all the best-loved characters and stories, will only be available from WHSmith. Note that later publication dates may change.
Posted by John Freeman at 10:20 am