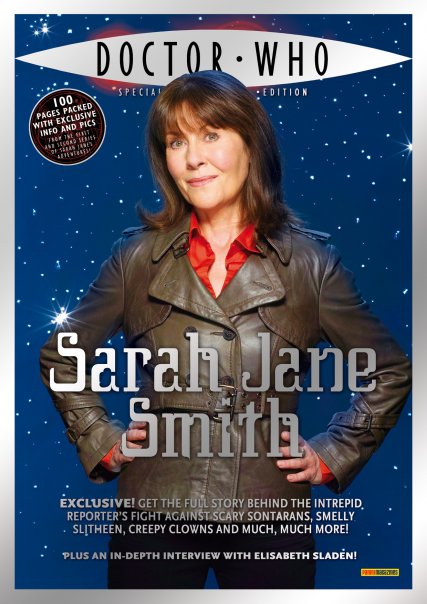 • Ace media site Den of Geek has the latest pics from BBC TV's Sarah Jane Adventures here. Panini, publishers of Doctor Who Magazine, have just put out a great special on the show, featuring a full rundown of episodes and a terrific interview with its lead, Elisabeth Sladen, but sadly no comic strip. A missed opportunity, perhaps, although Sarah has featured in a few Marvel UK/Panini produced strips so even a reprint might have been fun.

• Still, we doubt such concerns will worry many Doctor Who fans who are, as usual, divided over the latest change to their beloved show - a new logo. Melding a modern look with a nod to the Doctor Who styling of the 1960s, not everyone is happy about the TARDIS/Police Box-inspired branding.

Speaking from experience as a former editor of Doctor Who Magazine, changing the Doctor Who logo is almost as controversial as a new England football strip, and the feedback often as rabid...

• Talking of Panini, they're currently running a poll on their website asking for views on digital versions of their comics. Options range from sticking with paper versions (currently in the lead with 43% of votes) to digital versions as long as you can still buy in print (18%). Vote here

• Fancy a science fiction-inspired comedy night? Alex Fitch of Panel Borders has organised one in London. The Sci Fi London Comedy Night on 24th October is part of Sci-Fi London Oktoberfest, from 9.00 p.m staring Rob Deb from GNO, Sara Pascoe, Mould and Arrowsmith and many more. It's beaming into the Apollo Picadilly Cinema, more details here on Facebook.

• An updated version of classic game Beneath a Steel Sky (the original is now offered free through sites, such as GOG.com) is being released for iPhone and iTouch featuring art by Dave Gibbons this week, via the iTunes store. Gamespot UK reports on a BAFTA event last night that included Dave as a guest, talking about his work on the update. "I think what this remastering has done for me has reminded me exactly how much I enjoyed working on the game originally, and [game designer] Charles [Cecil] and I have kicked some ideas around," Gibbons said. "With the way I now understand technology better, the way that we could more efficiently put a game together, it's something that I'm really quite interested to do." Watch the video of the event...

• The Edinburgh International Book Festival folks were kind enough to give Forbidden Planet International a copy of their recording of the Neil Gaiman and Ian Rankin event (chaired by Denise Mina) from this summer’s event, now converted to web friendly format and available to enjoy on the FPI blog. "There are a couple of times when you can hear laughter with no obvious joke," says Joe Gordon. "This is Neil and Ian in naughty schoolboy mode enjoying adding in phrases like balls and sphincter-tightening to see how the nice woman who was signing in BSL for the hearing impaired would cope..."

• Since we're reporting from north of the border, I'm sure many of you may have already picked up on the news that the real-life inspiration for Dennis the Menace, mischievous star of The Beano comic, has been revealed as a mechanic from New Zealand. New Zealand? Just think - Gnasher could so easily have been the last Moa...

• And finally... Bleeding Cool recently reported the estate of Jack Kirby, co-creator of Marvel's Captain America, The Fantastic Four, The X-Men, The Avengers, Iron Man, Hulk, The Silver Surfer and Thor and has sent notices terminating copyright to publishers Marvel and Disney, as well as film studios that have made movies and TV shows based on characters he created or co-created, including Sony, Universal, 20th Century Fox and Paramount Pictures. You have to wonder what would happen if British comic creators started these kind of proceedings...
Posted by John Freeman at 11:49 am