Commandos At The Ready 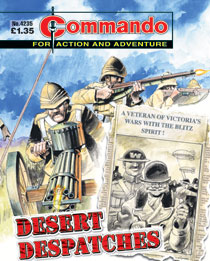 A new batch of Commando issues from DC Thomson goes on sale tomorrow (8th October) in all good newsagents. As usual, the releases are a mix of new and reprint titles, with Issue 4235, "Desert Dispatches", a continuation of a war reporter series.

Written by Norman Adams, Commando expert Vic Whittle tells us the issue had the working title "Lights, Camera... Action!". After finishing the first six adventures, the last being Issue 4050 ("Hold the Front Page", Norman had agreed with former Commando editor George Low to end the series, but artist Keith Page enjoyed the yarns so much current editor Calum Laird decided to bring them back. "Desert Despatches" the first of four new titles.


Thought you'd heard the last of Fred 'Ferret' McGlone, Harry Hornby and Digby Bolton? They were the Trident newspaper’s finest war reporters in a bygone era. But Ferret still has a few tall tales to tell — and they’re all true, of course...

Like the time the intrepid newsmen went to cover the war in the Sudan, and Digby had swapped his sketch pad and pencils for a new-fangled movie camera. Get ready to read their Desert Despatches! 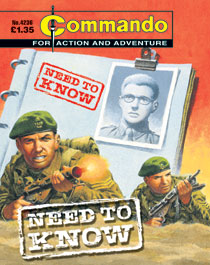 
A crack British unit was on a secret mission in German-occupied Greece. This operation was top secret, NTK − Need To Know. Then disaster struck. The officer in charge was killed and the only other person who knew their objective lost his memory in the same attack.

With the enemy on their trail, the team had to complete their vital task, and fast. If only they could work out what it was... 
Out of the night they came − a gang of international terrorists intent on holding a whole North Sea oil rig and its crew to ransom.

But they were not to have everything their own way. A call for help had gone out. The Royal Marines were on their way! 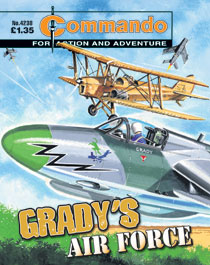 
As he lumbered along in his ancient Tiger Moth biplane, Eddie Sampson couldn’t wait to join his old friend, Mick Grady, who now commanded the mercenary air force flying for the government side in a bitter African civil war.

It was hard to believe that this wild, reckless Irishman could be in charge of anything. But Eddie soon had other things to worry about when a salvo of tracers suddenly streamed past him − fired by six rebel jets that were closing in fast...