Saints Be Praised! It's the Dead Sea Comic... 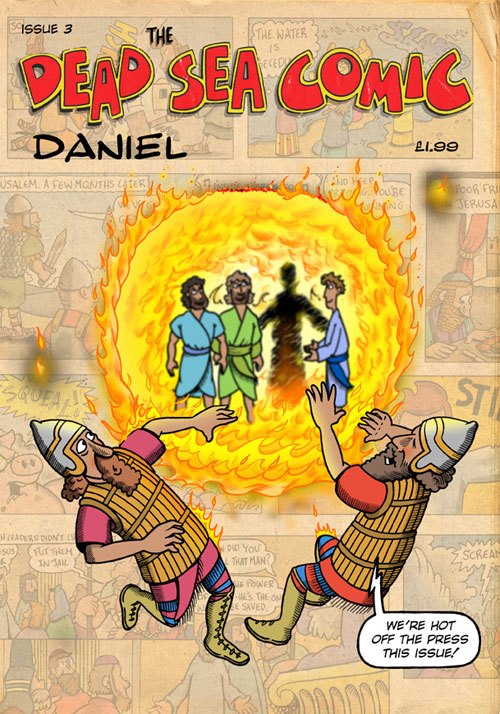 Straight from the caves of Qumran, missed by Bedouan and archaeologists alike, comes the Dead Sea Comic filled with fun, facts and figures from Bible times, from the downright bizarre to the truly incredible. Did you know that Abraham married his sister, or that it took Noah 120 years to build the ark!? Well you do now -- and it's all in here.

The Dead Sea Comic is the brainchild of top cartoonist Steve English and looks at the Bible from an observational view point, focusing on the people of the time, the narrative, and the writers who wrote it. Comic characters guide you through the stories. Professor Skeet teaches you ways to remember the facts and figures, Agony Ant explains how they tie in with other parts of the Bible, and Peter's Cat and the Entertaining Angels, among others, give their own offbeat interpretation of events.

As well as cartoons, maps, games and puzzles, there are also pull-out pages to use with your own Bible to make it more fun to own and use.

The comic is also supported by a website www.deadseacomics.co.uk which includes extra fun and resources to download.

Each issue of the Dead Sea comic focusses on a single topic from the Bible: Issue One covered the book of Judges, Issue Two, Noah and the Flood. The current Issue 3 is all about Daniel and the up and coming issue 4 will see the birth of Jesus - well in time for Christmas.

• The Dead Sea Comic is published bi-monthly at £1.99 and is available from Good News Books who can be found at www.goodnewsbooks.net. For more information you can also contact Steve at steve_englishATtiscali.co.uk.
Posted by John Freeman at 1:43 pm

I wish Steve the best of success with this, but I'm not sure that I would use the word "facts" when talking about bible stories ;)