Mike Battle, Back in Action! 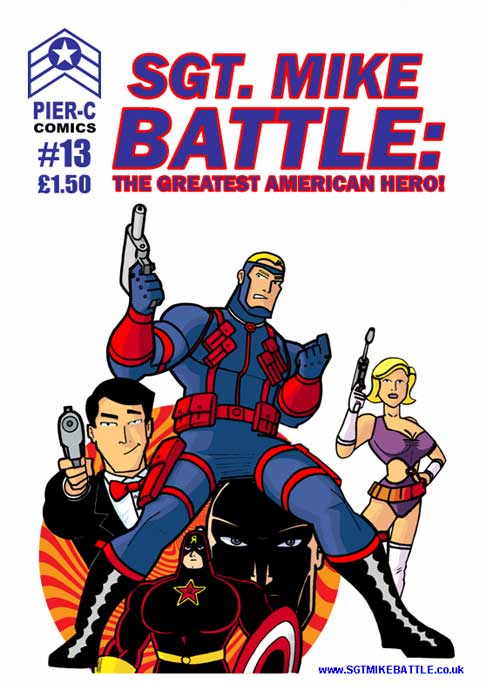 The latest issue of Graham Pearce's brilliant self-published comic, Sgt Mike Battle: The Greatest American Hero! has just been released - and it's another brilliant adventure. Anyone who can't wait for GI Joe to hit the cinema later this year should simply shell out and buy a copy of this terrific homage to all things action-adventure.

The latest issue (#13) is unlike any other, with Sgt. Mike Battle, Agent of Stars and Stripes have a fight in a sauna, see suave British Secret Agent Roger Knightly resigning from Crown and Sceptre and the lovely Shapely Charms getting fitted for her wedding dress!

Confused? Then that's your own fault for not picking up previous issues of Sgt Mike, what indie writer/artist Graham Pearce likes to call “the best kept secret in comics” -- and rightly so. Don't worry though, you'll soon get the hang of things. This issue is set, once again, in 1965 -- but sees a dramatic change as Sgt Mike Battle takes a step back and the focus turns to Roger Knightly who is starting to panic about his impending wedding to Shapely Charms.

“For various reasons Roger is starting to worry about the wedding” explains Pearce. “He is convinced that with all the English and American VIPs in attendance, the Soviets are going to attack the church and wipe them all out. Some people think that Roger is being paranoid, other’s think he doesn’t want to get married and is using it as an excuse to call it off.” 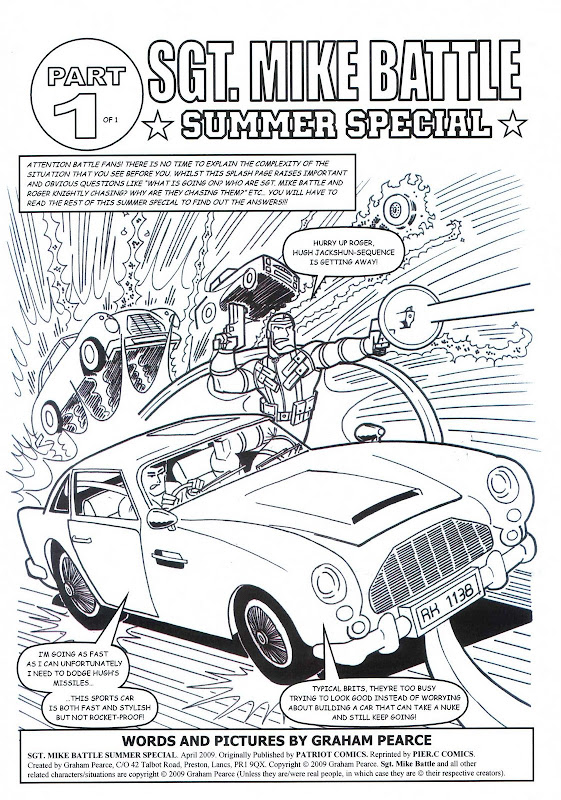 With some stunning looking art (click the image left or here to view sample of the opening page of the issue!), the issue definitely looks like one to look out for at upcoming British comics events - or simply buy it from the Sgt. Mike Battle official web site.

Pearce explains why the story is told from Roger Knightly’s perspective. “At the end of issue #12 we discovered something about Roger that shocked everyone. At some point in the past he started working with the Soviet Union and that decision has come back to haunt him. In issue #13 I needed to make it clear that he isn’t as bad as the revelation suggests, to show that maybe he isn’t as brave as we previously thought but also that he is actually torn between his secret agenda and his true feeling for Shapely Charms. The only way to effectively show his inner turmoil was to tell the story from his point of view.”

Originally the romance between Roger Knightly and Shapely Charms was meant to conclude in #13 but Pearce chose to extend it into #14.

“The story kept growing and I simply didn’t have enough space for everything. I couldn’t fit everything it all into a single issue so rather than cram it all into 24 pages I decided to spread it over 2 issues. The event of #13 now focus on the build up to the wedding and #14 is the wedding itself (and the inevitable overblown fight scene that may or may not ensue).

Graham Pearce is always subverting genre clichés in Sgt Mike Battle: The Greatest American Hero! and remains tight-lipped about the exact events of #14.

Of issue #13, Comics Bulletin says “Sgt. Mike Battle: The Greatest American Hero has definitely had a change of tone and focus with the introduction of Roger Knightly, but it remains a compelling and often very funny title, easily one of the best comics being put out by the self-publishing movement and utterly deserving of a far wider audience.”