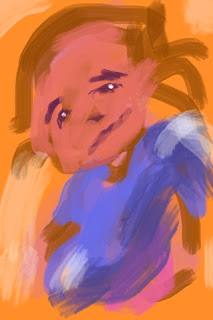 We haven't done one of these for at least couple of weeks, so hold onto your hats because there's some folk clamouring for space...

• Indie comics creator Sean Azzopardi has a new project - Thumbpaintings: life drawing using his Iphone and brushes app. Check them out at: phatcatz.org.uk/?p=1039

• Active Images and ComicCraft First Tiger Richard Starkings has also been answering questions, this time posed by the Den of Geek team. Richard talks about his Elephantmen title, his career at Marvel UK, Doctor Who and much more. A former editor of Doctor Who comics, he's just written a Doctor Who story, Cold Blooded War for IDW, from a plot by Gary Russell, revealing "It's not the kind of story I'd have come up with myself - this one features Ice Warriors, Draconians and even Alpha Centauri - but it was fun writing dialogue for Donna and working out how to pace Gary's outline into 22 pages. Fellow Brit and Whothusiast Adrian Salmon is the artist on this one, and he's done a great job."

• A quick reminder that Rich Johnston's new website, Bleeding Cool, is now live and it's already cranked up 400 forum members and material from the likes of Warren Ellis. Rich also picks up on rumours of a UK ComiCon we featured earlier this week, noting, as we have in updates to our story, that Comic Con International, behind the San Diego event, has denied being involved. Reed Publishing, behind the New York Comic Con has also denied involvement. The plot thickens...

• James Turner, one of many fine talents who worked on The DFC, has published an all-new Beaver and Steve strip featuring the characters that shot him to deserved national acclaim. "You may not like it," he says, modestly. Silly James - it's beaver and Steve: what's not to like?

• The Daily Mail has been having another punt at DJ and chat show host Jonathan Ross, this time ribbing him for his appearance, among other things. "His love of comic books and new-found friendship with Eminem imply that he is slightly immature," Jo Clements opined. Ross recentky revealed he'd given Eminem a copy of Avengers #3 when they'd met. "I knew he needed it. He’s a big Marvel fan," he explained.

• Delta and the Bannermen may have been one of the sillier Doctor Who stories of the 1980s (Ken Dodd has a cameo, for one thing), but fans of the sagas comic stories may want to pick up the new DVD release for the bonus features, which include interviews with Lee Sullivan, Simon Furman, Paul Cornell, Andrew Cartmel and John Freeman (who?), chatting about creating Who for Doctor Who Magazine. (If I look at all bedraggled in the interview it's because I got drenched finding the studio...). The DVD ships on 22nd June.

• Talking of Paul Cornell, he's been answering questions from fans of his Captain Britain and MI13 and Dark Reign: Young Avengers titles over on Comic Book Resources, which also has a couple of sneak peeks at the last issue of CB (#15). Talking about the book's cancellation, Paul says "Marvel put loads of effort behind it, an

d I got all the support I could wish for. I just think that, in the end, there are certain characters that won't sell well enough in the States. In the UK we were doing very well, but those numbers don't get added into the Diamond sales figures." Hmf!

• Talking of Transformers maestro Simon Furman, too: he'll be Derry in Northern Ireland this coming weekend, at the 2D Comics Festival. "This will be my third time at the Derry festival and I can’t recommend it enough," he enthuses. Declan Shalvey, David Lloyd, Liam Sharp, D'Israeli, Garry Leach and Rufus Dayglo will also be on hand, among others. Be sure to catch Paul J. Holden and ask him about the new Heroes Comic Reader, which we've been talking about over on the downthetubes mobile comics blog...

• And finally, since we seem to be on a 1980s reunion theme for this post, my old flat mate and 2000AD editor David Bishop's Doctor Who audio drama Enemy of the Daleks has been getting lots of praise on various fan forums. "I'd written a dozen different projects for Big Finish, so it was a joy to finally get the chance to script a four part story for the main Doctor Who range," he says. You can find out more about Enemy of the Daleks here, even download the first episode for the bargain basement price 99 pence - now that's value!
Posted by John Freeman at 12:45 am