New BoJeffries Saga in the Works 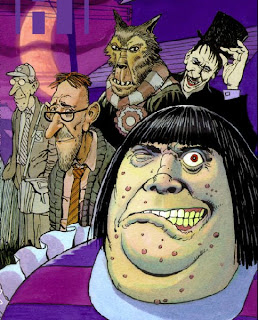 Alan Moore has again mentioned Top Shelf Comix will be publishing new episodes of his quirky story The BoJeffries Saga - a strip which can be likened, perhaps, to The Addams Family or The Munsters in terms of its "monster living on your street" setting.
Top British comics artist Steve Parkhouse will again be drawing the strip, as he told downthetubes some time ago, but swore us to secrecy as it had yet to be "officially announced". Alan subsequently mentioned the new stories in Padraig Ó Méalóid's fab interview with Alan for Forbidden Planet International recently, but we didn't pick up on it. More fool us!

First published in 1980s title Warrior, additional installments of the Bojeffries Saga, described as a "soap opera of the paranormal" subsequently appeared in US ttile Flesh and Bones before all the Warrior installments were reprinted in colour in Dalgoda. Five new stories then appeared in Atomeka's A1 Anthology (and Swimsuit Special), before the entire series plus some new ones were reprinted in a single volume, Tundra's The Complete Bojeffries Saga in 1984.

Two new stories were due to be published in 2005 in A1's Bojeffries Terror Tome #1, but that was never released.

Moore mentioned the new episodes of his surreal title during his talk for the ComicICA Festival on Tuesday night, according to reports on Bleeding Cool and Joel Meadows' Walls and Bridges web sites.

• More about the Bojeffries Saga on The Magic Robot Digital Scrapbook

• Bojeffries Saga on International Hero
Posted by John Freeman at 11:11 am