• On the eve of Barack Obama's inauguration as 44th president of the United States, surely only a warped mind like The Guardian's Steve Bell could come up with a cartoon like this, published in yesterday's paper. Well, it made me laugh out loud... Art © Steve Bell, More Cartoons by Steve here

• downthetubes' Jeremy Briggs has been doing a little digging into the mysterious trailers for the upcoming activities of London Underground Comics. "I searched on the 176 that LUC are referencing," he informs us. "There's a gallery space called 176 very close to Camden Market, were LUC used to be, which is open at weekends and has a cafe. It looks like the sort of place that would go for a zine fair style event..." Could this be what LUC are planning?

• Beano and Fortean Times cartoonist Hunt Emerson has been in touch to let us know about some updates to his web site (www.largecow.com), including five new Phil Stamp Covers and two new Beano Poems in the Gallery and information about New Products he has for sale including Ancient Mariner Mugs, t-shirts and tea towels and his classic t-shirt design for that great band The Beat. You're invited to take a look! 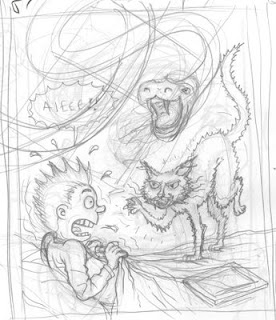 • The DFC's Faz Choudhury, creator of Dead Pets for the comic (and one of the artists involved in the web comic jam Huzzah along with Paul Harrison-Davies and others), has posted some early samples of the strip on his blog. "Before being given the go ahead to start, I did a sample piece to give a general idea of how the strip might look," he explains. "The characters changed a little from this initial piece, Frazzle the cat, in particular." Dead Pets is also being serialized in The Guardian - read episode two and three.

• (via Warren Ellis): Ben Templesmith is drawing a new Doctor Who strip, scripted by Leah Moore and John Reppion. "It's a one-shot comic from IDW," says Ben, who has posted some sample pages on Flickr. "It would make a cool tv episode if it weren't a comic."

• There's a new podcast interview with 2000AD and DC Comics artist Steve Pugh online via ComicBookPage. "It's the first time I've been interviewed over the phone, and I seem to have developed a charming girlish giggle," he notes on his blog.

• Talking of interviews, Forbidden Planet International has just posted one with Super Sam creator Darryl Cunningham (it's more than a year since FPI posted the very first Super-Sam and John-of-the-Night on the FPI blog), while Adam Cadwell, the main man behind the Manchester Comix Collective, has been interviewed by Bugpowder.

• Time for Werewolves! Part 3 of Frontier is now appearing in issue 33 of The DFC, available by subscription. Just as things were getting weird they now get… scary as werewolves threaten our heroes, Mitch and Daisy in this new strip by Andrew Wildman and Jason Cobley. More info at www.weirdwildwest.com

• And finally... here at downthetubes we were very sad to hear about the death of artist Tony Hart (read obituaries from The Telegraph, Guardian and Indpendent), an artist who inspired thousands down the years to pick up a pen or pencil and start drawing thanks to his appearances on shows such as Vision On and Take Hart. Many comics creators have paid tribute to him over the past few days. "He had a gentleness and kindness that you just don't see any more on TV," noted Jon Haward, while Gary Erskine says "He made drawing and painting and sculpting fun and encouraged a whole generation to explore their potential. Even cutting up paper was a marvel to watch and what he did with simple coloured chalk shapes still surprises and warms me."
"I loved Morph, and the Professor, but for me, it was always about Tony," says Rufus Dayglo. "He truly inspired generations of artists..and I'm certainly one of them."
"Hart managed to get a generation of kids picking up materials and making things, which gets you halfway towards being an artist," commented artist Michael Landy in The Guardian. "Who could replace him? None of the artists I know. Not one of us can draw like he could."
Lew Stringer noting that in addition to his many TV credits Hart was himself a comics artist, drawing strips for TV Comic in the 1950s, including Sooty and Packi the Elephant.