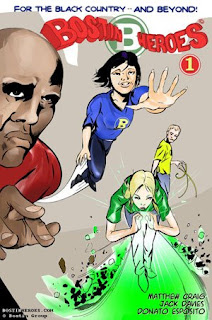 A British webcomic team is urgently seeking a new artist as it looks to begin its second story.

"I've recently been writing a webcomic set in the West Midlands called Bostin Heroes," Shropshire-based writer and small-press creator Matthew Craig tells downthetubes. "We've enjoyed a little bit of coverage here and there - local TV, newspapers, the FPBlog, etc. - but we've found ourselves in need of an additional artist."

Bostin Heroes, the creation of Donato Esposito, is the story of four ordinary people defending the Black Country and beyond on the eve of the Second Industrial Revolution.

The Bostin Heroes team are looking for an artist with a clean, friendly style to work in conjunction with series creator Donato Esposito and writer Matthew Craig to create short (8-16 page) stories starring the Black Country champions. Stories will be serialsed online at a rate of one to two pages per week, then collected for print.

The assignment would suit someone looking for their first comics job, or wider exposure for their work. As the stories will largely be based in and around the Midlands, artists should have some familiarity with the region.

For further information, please contact Donato Esposito via the team's contact form and be sure to include links to online portfolios or other work.

Originally hailing from Telford, Bostin Heroes writer Matthew has been described as “a perfect example of the breadth and passion of today’s British small press scene” by Richard Bruton on Forbidden Planet International’s comics blog. His books range from the canine courage of Hondle to the zombie romance of Vitale, as well as the unconventional superhero stylings of TroubleBruin and Trixie Biker.

The artist on the first story, Jack Davies, has been drawing since the age of four and counts the X-Men among his influences. A graduate of Hi8us Midlands’ Strip Search programme, with an exhibition at Birmingham’s Mailbox under his belt, Jack is currently studying illustration and animation.

Bostin Heroes was created by Donato Esposito, an IT and Business Consultant living in Rubery who has trekked across Peru for the British Heart Foundation, climbed Mount Snowdon, and started the Bostin t-shirt company from his back room. He says he founded the Bostin Group to promote positivity and regional pride, and this is his first comic ever.