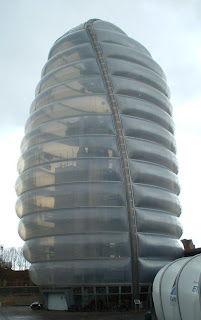 (Report originally filed by Jeremy Briggs): The National Space Centre in Leicester will be opening a new exhibition next Friday, 14 November 2008, running until 11 January 2009 entitled Invasion: The Fact Of Fiction, which will look at the science behind science fiction movies and include props and costumes from various films.

Also in attendance will be the UK Garrison with outfits from Star Wars, Predator, Stargate, Aliens, Ghostbusters and Indiana Jones, amongst others. 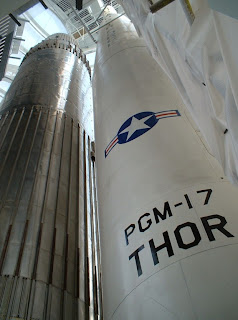 If that isn't enough, on Saturday 29 November they will be presenting Exterminate 45, a celebration of all things Dalek. With Davros actor Terry Malloy and BBC special effects man Matt Irvine the museum will have exhibitions of Doctor Who and Dalek memorabilia.

Project Dalek, an online information resource aimed at anyone interested in building a Dalek, and the Dalek Builders Guild will both take part in an attempt to create the largest gathering of Daleks ever seen. Attendees are being encouraged to take part by creating their own Dalek outfits.

The National Space Centre is an interactive museum recording the history of space travel and includes the impressive Rocket Tower in which a real British Blue Streak and an American Thor Able rocket are mounted in a vertical launch position.

• More details are available at the National Space Centre website.
Posted by John Freeman at 8:17 am