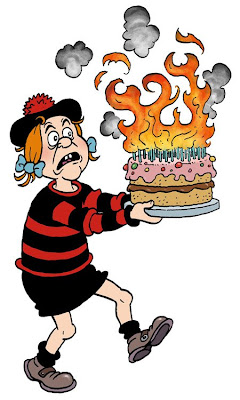 Euan Kerr, former editor of The Beano, has hit out at the current content of the comic and the Dandy arguing they have become too politically correct.

In an article in the Telegraph, picking up on a report in Scotland on Sunday, Kerr, who edited the Beano for 22 years, says key characters such as Dennis the Menace and Desperate Dan in the Dandy had to be "toned down" during his tenure.

He stopped Dennis menacing the character Walter the Softy in the 1980s to avoid claims that the comic may have encouraged "gay bashing, and points to how cow-pie eating cowboy Desperate Dan was forced to go on a diet have his revolver was replaced by a water pisto.

"The evidence is that the kids understand a comic is a comic and that it isn't anything like real life," he told the paper. "But the relationship between Dennis and Walter was always one that worried me.

"There were accusations from certain quarters that it was a little like gay-bashing. This obviously wasn't the way we intended it to be perceived.

"We decided the best way to approach it was to make sure that even though he and Dennis didn't get along, Walter was completely happy about who he was and a confident, likeable character in his own right."

Speaking to Scotland on Sunday, Kerr conceded that other aspects of the Beano had been softened to avoid falling foul of liberal critics.

"The comic has certainly changed over the years to come in line with political correctness," he said. "For example, every strip used to end with the rogue of the piece being punished in some way – usually a smack across the head or a slipper across the bottom.

"This sort of corporal punishment became outdated and eventually it was phased out."

Now, Kerr argues the pendulum had now swung too far and he would welcome a return to the comic's anti-establishment roots and there are already signs that the balance is slowly turning against PC culture in strips such as The Neds, which chronicled the misadventures of work-shy, Scottish ne'er-do-wells.

Kerr's concerns about the comic are supported by the Campaign Against Political Correctness, publishers of The Politically Correct Scrapbooks.

"For 70 years the Beano has been read by children and they do not look at comics through politically correct eyes," commented John Midgeley. "It's a great shame that in recent years this national institution has been watered down to placate a tiny minority of humourless, do-gooding adults."

This is really just a case of the media getting readers in a froth over nothing isn't it? Euan is still working for Thomsons as editor of BeanoMAX. Once again The Beano manages to get themselves free publicity. ;-)

The clever bunnies... There's no such thing, it seems, as "bad publicity". Well, unless you're Gordon Brown or Lehmans.