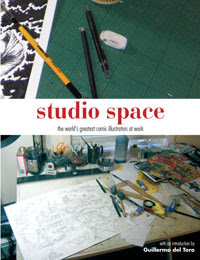 Marking the launch of Image Comics’ exciting Studio Space book, the publishers have lined up four signings/ events throughout the UK starting in May.

Written by the creators of Tripwire magazine - Joel Meadows and Gary Marshall - Studio Space (available from amazon.co.uk from the end of May) looks at the way that the world’s best comic book artists work, visiting their studios and getting into their mindset. Each chapter also looks at the creators’ big break and whether their working methods have changed over the years.

Kicking off at the Bristol International Expo on the weekend of May 9th-10th at the Commonwealth Museum in Bristol, paperback copies of Studio Space will be available there before anywhere else in the world and people will get the chance to get them signed by a selection of artists in the book, including Dave Gibbons, Duncan Fegredo, Sean Phillips and Walter Simonson, who will all be at the show plus the authors of the book, Joel Meadows and Gary Marshall, who will also be on hand throughout the show. Additionally, there will be a Studio Space panel at Bristol on the Saturday afternoon with the book’s authors and some of its artists.

But it doesn’t end there: on Saturday 7th June, Forbidden Planet London will be holding a signing in the afternoon to celebrate the book’s official release with a superstar line-up of artists: Brian Bolland, Dave Gibbons, Sean Phillips and Duncan Fegredo. Copies of the paperback and the hardcover will be available at the signing.

Next up is a special Waterstones event taking place at the prestigious store on Oxford Street opposite Selfridges on Saturday 14th June, with Bryan (Alice in Sunderland) Talbot and Preacher co-creator Steve Dillon discussing their work and the book and then signing.

Finally, for the fans in the North, Saturday 28th June at Forbidden Planet Manchester will see Dave Taylor and Steve Dillon signing for fans.