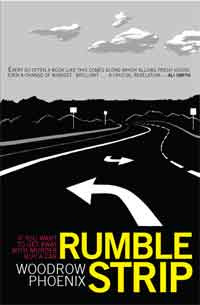 Rumble strips were invented to alert us to hazards. In fog or snow, or even worse, on the verge of sleep, when you...just.... can’t... keep... your... eyes..op-drrrrrrrrrr drrrrrrrrrrrr drrrrrrrrrrrrr! The noise, the jolt, the vibration of those grooves wakes and prevents drivers from going off the edge of the road. Sometimes we all need a wake-up call.

It’s extremely timely. Publishers Myriad Editions, who will publish the book on 12th June note that the United Nations recently warned that road safety is a ‘public health crisis’ on the scale of Aids, malaria and TB.

Rumble Strip uses the key tools of traditional comic strips but dispenses with the most obvious element: the hero.

"For a graphic work that doesn't show a single human being, this is an extraordinarily human book<" says comics expert Paul Gravett. "Its ideas and questions about how the car impacts on your life will echo in your mind long after you've finished reading it, whether you're a driver, or a pedestrian, or both."

The book offers a trenchant analysis of the problems of road users everywhere and the challenges faced by all of us, whether we drive cars, ride motorbikes, pedal bicycles, take public transport or just walk, we all have to use roads.

"Rumble Strip is not a graphic novel. It isn’t fiction," Myriad outline. "It isn’t a coming-of-age tale. It doesn’t follow the adventures of a likeable-but-f****d-up protagonist. Rumble Strip is fact. Part journalism, part polemic, part memoir. All real. It is a strikingly uncompromising look at death that affects every one of us.

"Rumble Strip uses the key tools of comic strips but dispenses with the most obvious and traditionally necessary part: the hero. Instead, the reader becomes the subject. The pages appear to be empty. But through the captions, the reader is invited to inhabit the pages, to take up the central position of protagonist and experience the book in an active way. It’s a technique that eliminates distance. It may sound odd, but you will be surprised at how easily and fluently you are drawn in."

Aiming the book at "people who traditionally don’t look at comics" (Guardian critics?), Myriad say they've found it extremely easy to read. It will be interesting to see if it therefore gets a plug on Top Gear...

Woodrow also works in the fields of editorial illustration, graphic design, font design and children's books. His work is graphic and playful but is unusual for its high degree of formal experimentation. His graphic story End of the Line first appeared to much praise in The Brighton Book, a mixed media anthology in association with The Brighton Festival.