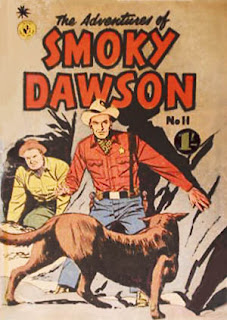 Over on Comics Down Under, Kevin Patrick recently paid tribute to Australian musician Smoky Dawson, who died last month but who was at one time famous enough to be the star of his own comic.

"Even if you're not a fan of country & western music, you cannot deny that Smoky Dawson, who died Thursday, 14 February 2008 at 94 years of age, made an indelible contribution, not only to Australia's country and western music industry, but to Australian popular entertainment," feels Kevin. Read the full tribute...

Comics Down Under is devoted to the history of Australian comic books, from the 1930s and 1940s to the present day. Each installment looks at a different aspect of Australian comics' history, ranging from landmark characters and their creators, to profiles of publishing companies and interviews with current Australian comic writers and artists.

While apparently not updated as regularly as Steve Holland's British comics history blog Bear Alley, Comics Down Under has some fascinating articles on antipodean comics history and is well worth a browse, especially given the number of British comics characters and indeed, comics, published there.
Posted by John Freeman at 4:15 pm