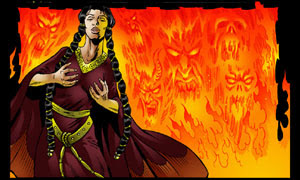 Colourist Nigel Dobbyn recently told the downthetubes forum artist Jon Haward "has certainly made me work for my money on the last few pages, which have a huge cast and a suitably epic quality to them.

"Gary Erskine also pitched in to help with the inking on the last pages," he also revealed, "and will be fully inking Jon on the next project of his - The Tempest - which I'm also down to colour and letter."

"It's been a slog at times getting the 121 pages of Macbeth finished, especially these last pages, but I think we're all agreed, it's something to be proud of."

Meanwhile, artist Jon Haward is delighted that Shakespeare and Star Trek actor Patrick Stewart has recently been singing the praises of the new comic version of Macbeth.

"I'm fascinated by your approach," he recently told publishers Classical Comics referring to their three original, plain and "quick text" editions of their comic strip adaptations of the play. "I find them gripping, dramatic and, although for me the original Shakespeare is always my reason for turning to these plays, I think that what you are doing in illuminating and making perhaps more lucid, especially for young people, is clever and meaningful."

Patrick Stewart's recent stint in Macbeth at the Gielgud Theatre in London garnered him several awards - including Best Actor at the Evening Standard Awards, and the prize for Best Shakespearean Performance at the 19th annual Critics' Circle Theatre Awards (which he shares with Chiwetel Ejiofor for Othello) - and the production transfers to New York's Brooklyn Academy of Music on 12 February.

"As a a big fan of Patrick Stewart, this news really made my day," Jon told downthetubes.

Here at downthetubes, we think the advance pages from the project look great and Jon has clearly proven the right choice for bring Macbeth to life, successfully accommodating the demands of three different formats with consumate professionalism. Couple that with Nigel's colouring and Classical Comics surely has a winner on its hands.

The interpretation Jon's brought to the text is bold and striking and should surely stir some young hearts and minds to take an interest in our beloved Bard of Stratford!

I've seen Henry V -it is superb. I can't wait for MacBeth