Hicklenton hits out at MS in new film 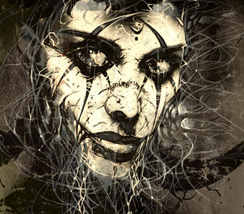 2000AD artist John Hicklenton has reacted angrily to becoming ill with MS, inviting cameras into his home for a new documentary, Here's Johnny, to record the destruction of his life by the disease, and to campaign for better treatment for sufferers.

A screening of the film, will take place at the Dana Centre in the Science Museum, London, on 30 January and John will be speaking at the event.

John cannot move without a wheelchair and is often confined to his west London home. He talks candidly about his problems in the film, but also with great humour; at times he has relied utterly on that to see him through some very bleak days.

The Daily Telegraph reports that when the 40-year-old British comic artist, perhaps best known for his brutal, visceral work on 2000AD characters such as Judge Dredd, learnt that he had multiple sclerosis, the news was delivered with a brutality that stuns him still - nearly seven years later.

"The doctor, a locum, just stared at her computer screen," he told the Telegraph, "and never once looking at me, said: 'You've got MS. You'll be dead in 12 to 15 years.' Just like that." Her remit, he says, was presumably not to become emotionally engaged. Johnny's is the opposite, and is now passionately involved in a fight against what he terms "this terrorist illness".

Now virtually bed-bound, John talks candidly about his illness in the documentary, made by Animal Monday and funded by the Channel 4 British Documentary Foundation and the Wellcome Trust. It's due for international release later this year.

The film shows how John, whose work also includes record covers for Switzerland-based Red Light Records as well as comics, escapes the confines of his front room by drawing. In Here's Johnny, you'll learn about the disease that he is forced to co exist with through the expression of his brilliant, and sometimes troubled, imagination.

"For Johnny," the Animal Monday web site reveals, "to draw is to live." Unfortunately, even that is now being taken from him, but he is beginning to face up to the fact that MS is stealing away his powers to draw.

''I am grateful for the amount of drawing I have done so far, but I'm scared to put pen to paper now," he told the newspaper. "The last time I drew anything was last year."

Despite this, he remains remarkably upbeat, with strong support of friends and family. "The more intense the disease gets, the more intense my relationships become," he says. "I never feel excluded because people are really sweet and they forget I am ill. My mum has been particularly helpful."
• To book tickets for the free Dana Centre screening of Here's Johnny call 020 7942 4040 (you must reserve a place to attend) or e-mail tickets@danacentre.org.uk
• For a clip of the film or more information, visit www.animalmonday.co.uk or www.danacentre.org.uk.
• MS Society Helpline: 0800 800 8000

(With thanks to Dave Windett for the link)

Update: John died in early 2010. Pat Mills, who often worked with John, looks back at the career of an extraordinarily talented artist here on the downthetubes main site, a version of his feature for Judge Dredd: The Megazine which has also appeared elsewhere online.
Posted by John Freeman at 1:39 pm