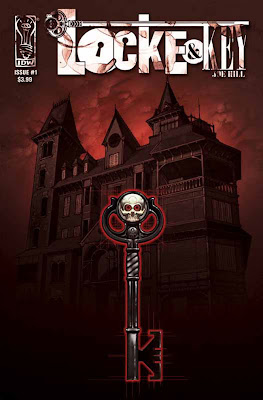 Comic fans still mourning the loss of defunct UK horror comic Scream! might be interested in a new spooky comic, Locke and Key, coming soon from IDW, the US publisher responsible for the new Doctor Who titles. As it's an American title you won't be able to pick it up in newagents over here, but it should be relatively easy to find in comic shops.

Wriiten by novelist Joe Hill, author of best selling novel ''Heart-Shaped Box'', this new comic is drawn by Gabriel (Beowulf) Rodriguez. In July 2007, Hill explained that ''Locke & Key is a supernatural thriller about three kids who find themselves the custodians of an unlikely New England mansion called Keyhouse. Within the house are secret doors with transformative powers, the power to fundamentally change a person’s identity... they find themselves pitted against a thing that calls itself Dodge... There’s a terrible door within Keyhouse that Dodge would like to force open, and which my heroes have to keep shut at all costs.''

Expect to see this new title on the shelves in February.
Posted by Ian Wheeler at 11:21 pm