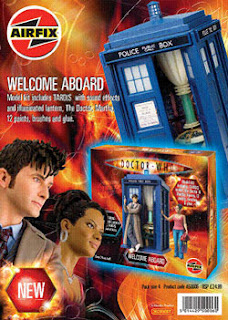 Airfix, the British model kit manufacturer, had many problems last year attempting to get the first of their new Doctor Who kits, Welcome Aboard, into shops in time for Christmas. The saga was even detailed on the BBC TV series The Money Programme.

Stocks of the kit, featuring 1:12 scale models of the Tenth Doctor, Martha and the Tardis, should now be more readily available.

Airfix have now announced their 2008 range and it includes two further kits for Doctor Who fans, Dalek Encounter, which will feature Dalek Sec with its casing open and, for Kylie fans, the Doctor and Astrid from the 2007 Christmas special Voyage of the Damned.

• Buy Welcome Aboard kits from amazon.co.uk
• Buy Voyage of the Damned from Amazon.co.uk (Released 10 March 2008)
Posted by Jeremy Briggs at 5:31 pm

Email ThisBlogThis!Share to TwitterShare to FacebookShare to Pinterest
Labels: Doctor Who, Merchandise, Models

Not seen this in any shops yet. I hope they do a kit of the Emperor Dalek from series 1, I really liked what they did with that. Maybe with a small Doctor,Rose and a few Dalek's for scale !!