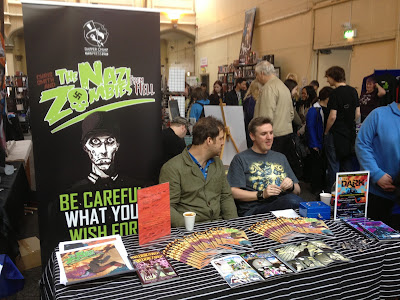 They say you always remember your first love, and when it comes to Comic Conventions for me, that means Bristol. Back in 2002 it was the first convention I ever went to, and at the time the UK Comic Festival was the only major event in Britain.

Some big moments have happened for me in Bristol, in '04 I won the Writer's Pitching Session, in '06 the concept of Orang Utan Comics was born and in '08 our collective of creators attended the Eagle Awards as expectant, but ultimately disappointed nominees. So it seemed the perfect place for my new imprint Dapper Chimp Press to launch our first book Chris Smith and the Nazi Zombies from Hell.

From an exhibitor's perspective, being back in Brunel's Old Passenger Shed by Bristol's railway station made a big difference. The room is brighter, airier and far more welcoming than being in a hotel.  Our stand was at the far end of the hall, opposite the food stall and next to Sgt Mike Battle and my old friends from Orang Utan Comics. 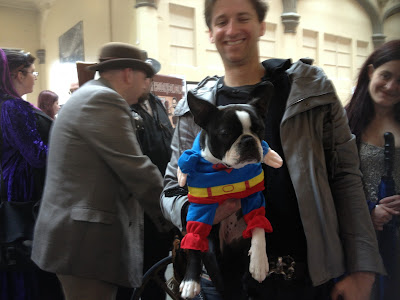 Saturday started very well, with a good number of people in attendance from the minute the doors opened.  But one thing was really noticeable: this was a different crowd, not the same faces you've seen at conventions up and down the country for years. All these new people and fresh blood helped make the atmosphere across the weekend extremely buoyant.  There wasn't even a hint of cynicism, and with so many creators and fans in one place that's quite an achievement. 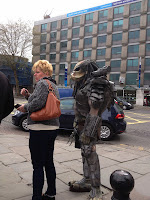 Not only were people smiling, they were extremely engaged and I've never had so many conversations from one side of the table to the other. People who said they'd come back and buy a copy did just that, and those who decided the book wasn't for them still found time to ask about the process and to wish us luck.  A younger crowd also meant more cosplay, from superhero and anime characters to genre movie staples, we even managed a Nazi Zombie of our own.

Saturday evening in comparison was a bit of a damp squib,. As night outs go it was good fun but it missed that sparkle of comic convention magic. There was talk of a cosplay event somewhere, but there didn't seem to be an aftershow epicenter. The official hotel, newly refurbished and now known as the Doubletree by Hilton, wasn't busy until after the nearby Wetherspoons closed. At £5.10 a pint it's not hard to see why, especially with no organised entertainment on site. It had me longing for the days of Scandanavian Ska Punk bands and Dez Skinn not realizing Matt Smith from 2000AD was in attendance. 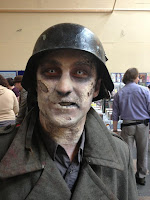 Sunday was relatively quiet, with far less eye contact and minimal conversation from the passers by, meaning sales were relegated to much more of a trickle.  My hangover was actually quite grateful for the respite. The only real negative I can level at the convention was the decision to have the cosplay parade and button mashing contests right in front of the gents' toilets.  I'm pretty sure this Kessel Run of lavatorial journeys wouldn't have made it through even a half-baked attempt at a risk assessment.

In 2013 Thought Bubble in Leeds and the collective might of the growing number of London conventions, seem to have the biggest draw for creators and publishers. Ian Gibson and David Lloyd were among the most luminary names at Bristol this year, and having Vertigo Executive Editor Shelly Bond presenting a panel and reviewing portfolios did elevate proceedings somewhat.

So, is a Bristol without such stalwarts as Hypotheticals or Bob Wayne's flamboyant shirts still a viable proposition? I definitely think so. This year's Bristol Comic Expo struck me as a totally honest one, proud of its new position as a regional show, complete with a newer, younger and no less enthusiastic crowd.  I'm already looking forward to 2014 and rekindling my love of Bristol once more. 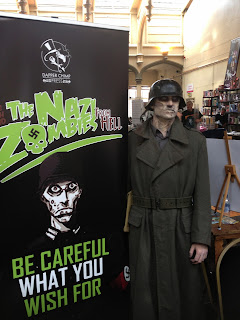 He burst onto the scene in 2004, winning the Writer’s Pitching Session at the Bristol Comic Expo. In 2007 he co-founded Orang Utan Comics, publishing anthology title Eleventh Hour featuring his own short stories alongside the work of other rising talent. A year later the book was nominated for an Eagle Award.

In the years that followed he’s had a wide variety of work published about a variety of subjects including soldiers, vampires, vikings, superheroes, footballers and demon hunters. A qualified teacher he also lectures and runs workshops on writing for comics.

Currently working on a number of mini series proposals to be pitched to publishers later this year. He lives in Cardiff with his wife and daughter.

•  Rai at Blargle Fargle
"It was my first real con and a little bit overwhelming if I'm honest - a fairly small room with lots of people in it, though I did enjoy the cosplays dotted about..."

• PCG
"Speaking to various indie press guys and gals it also seemed that while they were enjoying the good natured socialising that accompanies every Bristol Comic Expo, their success rate at selling the fruits of their hard work was down a little on previous years, though those regular attendees with brand spanking new works on sale - Ronin Dogs creator Mark Pearce for one - reported that business had been good."