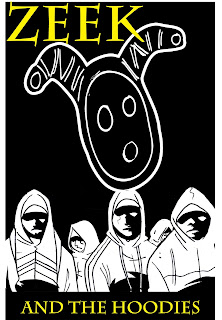 The first book is available to buy through Smashwords.com and, for a limited time until 1st December, you can claim a coupon for 50 per cent off the retail price.

Claim your coupon at www.zeekworld.net.

Enn Kae, who describes himself as a writer of "dystopian fiction", was born in a small town in north-west of England to immigrant parents and has lived in both Scotland and England. At 21, he left Scotland to live in England. He has worked in many guises: office worker; car insurance salesman and, for the past 5 years, as a teacher. He has taught one of the most vulnerable groups in Britain: young people at risk of exclusion. His stories evoke the sense of isolation and alienation that he experienced whilst growing up in the UK and they are also inspired by the kids he taught.

Enn got the idea for Zeek back in 2007 –  a series of satirical and dystopian graphic novels with the aim of making people 'wake up' to their realities. Now, over five years later, he presents Zeek and the Hoodies - a vigilante's dark and satirical journey through England's cultural landscape encountering double-speak, the 'sheeple' and media manipulation.

Many stories have been told about anti-heroes and Ezekel “Zeek” Carnegie is a man struggling to make sense of a country that he no longer recognises. “Zeek and the Hoodies” examines his journey from an ordinary man - Ezekiel Carnegie - into a vigilante by the name of “Zeek” who wants to clean up the city and return his neighbourhood to his childhood land.

With the help of a powerful man named Victor Proctor he will plot to return England to its former glory but will his anger towards every group in England be enough for Victor to realise The Project - or will “Zeek” come to his own realisation about himself?

Told over eight books, the first one ends with the question - who will be next, after The Hoodies?

The series is being published via Smashwords, the world's leading ebook publishing and distribution platform, which has has distribution relationships with leading online retailers such as Apple, Barnes & Noble, Kobo, Sony and Diesel eBooks, and leading mobile e-reading apps including Aldiko, Stanza, Kobo, FBReader and Word-Player, spanning all major mobile platforms including Android, Blackberry and iPhone.

• For more about Zeek and creator Enn Kae visit www.zeekworld.net; or  www.facebook.com/ZeekandtheHoodies; or http://www.tumblr.com/blog/zeekworld
Posted by John Freeman at 9:37 am