In Review: Largo Winch - The Price Of Money/The Law Of The Dollar 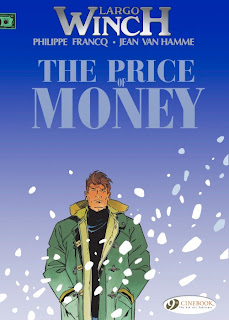 Largo Winch, writer Jean Van Hamme and artist Philippe Francq's James Bond-like billionaire, returns in his latest two part adventure in Cinebook's The Price of Money and The Law of the Dollar.

Appearing on a live TV business programme, The Price Of Money, Largo is as shocked as the viewers when Dennis Tarrant, the former manager of a company that Largo's W Group had taken over and caused 2500 redundancies in, puts a gun to his head and pulls the trigger. With public opinion against him, Largo launches a W Group investigation of that business transaction before travelling to Tarrant's funeral. There he attempts to offer his condolences to Tarrant's blind daughter June but he receives a cold rebuff from her followed by a severe beating from some of the men of the town. 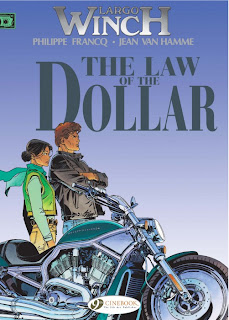 The accounts of Tarrant's company appear to have been altered to cause the redundancies and Largo beings to dig deeper just as June Tarrant launches a court case against him for compensation of $50 million. When the former accounts secretary of the company ends up dead, Largo is framed for her murder and, on the run from the law and with American public opinion turning against both him and the W Group, Largo is forced to go to ground.

Jean Van Hamme's name on a book is a sure sign of quality and when it is a Largo title then that normally means a James Bond-like action fest, except that this time it isn't really. Don't get me wrong, punches are traded, guns go off and there are motorbike and helicopter action sequences, but on the whole this is slightly more sedate and talky Largo story than normal and, if anything, it is to the story's advantage.

Van Hamme emphasises the insider trading/stock options information in the first book and repeats it as a text introduction in the second as an understanding of it is vital to the machinations of the plot. While it makes for a Largo story that is perhaps heavier on exposition than the previous episodes, it also makes for a story that requires more thought than the more normal Largo romps and I enjoyed that. 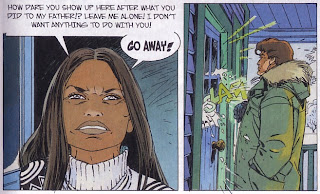 Philippe Francq's artwork is as slick as ever covering helicopters, bikes and even Mounties on horseback when Largo goes to ground in Canada yet, despite all the panels of talking heads explaining the intricacies of the plot, he never gets into a rut and his work is always enjoyable to look at.

These are translations of the 13th and 14th French Largo Winch albums originally published in 2004 and 2005. In France the series has just reached its 18th book, Colère Rouge, this month meaning that Cinebook have only two sets of two books each still to go before they are up-to-date. The first of those, and the next Cinebook Largo Winch title, is due out in February 2013 under the mouthful of a title The Three Eyes of the Guardians of the Tao.


Largo Winch - The Price Of Money/The Law Of The Dollar is not quite the runaround that we have become used to in the previous Largo books but it is no less of an intriguing read for it.

• There are more details about all the Largo Winch books, as well as the two live action films, at the official Largo Winch website (in French).