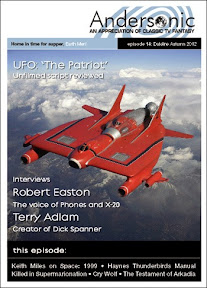 Issue 14 of the excellent Gerry Anderson series-inspired Andersonic is now available via their website (and eBay for a short period in the Collectibles>SF>Thunderbirds section).

With a cover image by Keith McNeill, the issue features the following:

The issue comprises 44 pages with colour inner and outer covers and is available via the website www.andersonic.co.uk - price £2.15 including UK postage. It's also on eBay for a limited time. If you'd prefer to pay by cheque or PO, please get in touch for a postal address. Back issues are also in print.

• Why not also take a look at the publishers little sideline, Plaything of Sutekh, a Doctor Who fanzine.