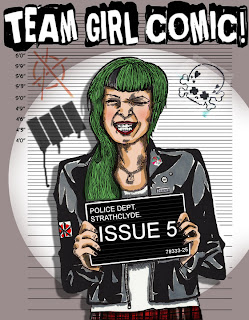 A week ago we mentioned the Kickstarter campaign that Glasgow's Team Girl Comic collective were running to finance the publication of TGC issue 5 and possibly reprint some of their sold-out back issues. It has been the most viewed blog piece on downthetubes over the last week even if the Kickstarter video, featuring TGC editor Gillian Hatcher and issue 5 cover artist Coleen Campbell, was incompatible with our Blogspot format. Our thanks to Gillian for pointing us towards the YouTube version.

So we are very pleased to hear that only a week into their campaign they haven't just reached their target of $1000 but are now over the $1200 mark. This will allow them to reprint issues 1, 2 and 3 as well as finance their attendance at more conventions and comic marts over the next year.

The Kickstarter campaign will continue to run until Friday 8 June 2012 so there is still time for more backers to jump on and plenty of Team Girl rewards still to choose from with the top reward, of the offer of a night on the town with the team for an $80 pledge, having so far been taken up by three backers.

Of the 48 backers so far registered, some come from as far as France, Portugal and the United States while, based on their first names, there is approximately a 60/40 female/male split.