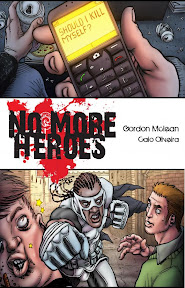 No More Heroes, a British self-published comic released just last week, is now amongst the most popular downloads on pirate sites such as Demonoid, ranking high in the “top torrents” list -- alongside the likes of other ilegal downloads such as The Walking Dead and Batman.

No More Heroes #1, written by Gordon Mclean and drawn by Caio Oliveira, is available to buy as a print and as a digital PDF edition, but a pirate version has been downloaded over 1600 times on Demonoid alone.

Rather than see the theft of their work as a bad thing, the creative duo behind the comic are hoping to use this popularity to attract a publisher.

“This has blown my mind, to be honest," says writer 31-year-old Gordon Mclean from Scotland. "I knew we’d made a good comic, but to see it become so popular so quickly is crazy.

"Don’t get me wrong, I would have loved those 1600 sales," he emphasizes, "but I’ve decided to take it as a really positive thing that so many people want to read No More Heroes and word of mouth has been so good. The goal has always been to attract a publisher for our comic and we hope this proves there’s an audience out there for it.

“You have to remember that this is a self-published comic by two unknowns with no marketing or advertising behind it. It’s been thanks to word of mouth and great reviews that it’s been generating a bit of a buzz.

"Special thanks to Rich Johnston at Bleeding Cool – the first of the big comic sites to mention No More Heroes and what must’ve been the turning point!”

No More Heroes tells the story of Sid Millar, an average guy who receives an anonymous text message asking, “Should I kill himself?” Drunk and goaded by friends, he replies “Yes”. It turns out this text was sent by Dark Justice, the world’s greatest superhero, who has committed suicide. Or so the world thinks. Dark Justice’s sidekick believes his boss was actually murdered and forces Sid to help him with the investigation into the suspicious death.

The comic is planned as a four issue mini-series - a mixture of the superhero and murder mystery genres with action and dark humour.

“No More Heroes isn’t just popular among online pirates," says Gordon. "We’ve also been selling a surprising amount of print and digital copies with orders coming in from the likes of America, Canada, New Zealand and Germany. We’ve had comic store owners asking us if we can do wholesale and inviting us to visit the store if we’re ever in the area. We’ve even had people who’ve illegally downloaded it get in touch to say they enjoyed it so much they’d like to give us some money!”

While they have experience in the writing and illustrative industries respectively, No More Heroes is the professional comic debut of Gordon and Caio.

“It was listening to Mark Millar give a talk at the Kapow Comic Festival promoting creator-owned comics that inspired me to make my own," Gordon reveals. "I had just been laid off and I used my redundancy money – and sold off my collection of Playstation games – to fund the comic and put together the best art team possible.

“I met Caio online and he was like a gift from the gods. I was incredibly impressed by his artwork and knew right away he was perfect for No More Heroes. It all quickly took off after that and now the first issue is out there and being better received than we could’ve hoped for.”

• More info and read a free Preview at: http://nomoreheroescomic.wordpress.com

How to get No More Heroes legally:

• UK Customers: Issue 1 of No More Heroes is now available to buy for £3 plus £1 P&P. This is a limited print run and each issue is signed.


• Non-UK Customers: For world-wide customers No More Heroes #1 is available for £3 plus £3 P&P. This is a limited print run and each issue is signed.


• Digital Version: A digital version of No More Heroes #1 is also available and will be emailed to you in PDF format upon purchase. It costs £1.
Posted by John Freeman at 1:30 pm

Personally I think giving pirates any publicity whatsoever will only, in their minds, justify their warped sense of entitlement. This particular small press publisher might be happy with it but what the pirates are doing is illegal, pure and simple.