In Review: Darwin's Diaries - Death of A Beast 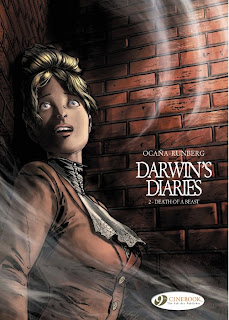 Writer Sylvain Runberg returns from the future worlds of Orbital with Death Of A Beast, the second of the nineteen century set Darwin's Diaries with art from Eduardo Ocana and colours by Tariq Bellaoui and which follows directly on from the first Darwin book, The Eye Of the Celts.

Naturalist Charles Darwin is in Yorkshire investigating, at the request of the Prime Minister, the attacks on the workers at a new railway construction site. When the army kill the hitherto unknown beast, Darwin returns with Suzanne Dickinson, the daughter of landowner, to report on the events to her father while the corpse of the beast is prepared for transportation to London where it will be dissected. 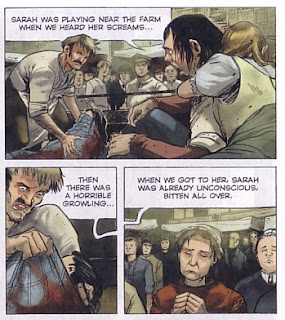 However the body of a child brought into York shows the citizens that there is still a beast on the loose and they turn on the travelling druids who appeared around the same time as the first attacks. Defended by both the army and Darwin, the druids are advised to move on but instead their leader decides to summon up an evil beast to take revenge on the city. Shortly afterwards the wagon with the corpse of the first beast, and its armed guard, are viciously attacked.

The first part of Runberg's story in the previous book was intriguing with its slow build up interspersed with the hi-speed violence of the beast attacks as well as developing a darker side to Darwin that the reader was not expecting. This second book develops the ideas that were set out there, leading to a climax that is unexpected to say the least and which I cannot even really hint at without, perhaps, giving too much away. It would be worth pointing out, as in one of Cinebook's The Bellybuttons titles, the last page visually gives away what the plot has been building up to and so this is not a book that is safe to flick through before reading. 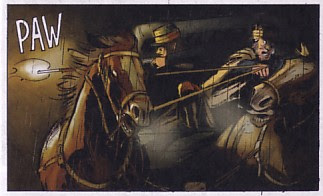 Yet Ocana's artwork and Bellaoui's colouring encourage flicking. The moody art and the sensitive colours do much to enhance this story as the mysterious beast attacks the wagon, viciously dispatching the guards over some half dozen virtually silent, but none the less engrossing, pages. Like The Eye Of The Celts before it, Death Of A Beast is gruesomely violent and lives up to the 15+ label that Cinebook have tagged it with. Yet Ocana's art works just as well for the fine upstanding Darwin visiting a feminist school during the day as well as for the darker side of his nature with a prostitute in an alley that night.

Darwin's Diaries - Death Of A Beast lives up to the high standards of its predecessor continuing as it does the intriguing plot line with some beautifully realised artwork.

• There are more details of Darwin's Diaries on the Cinebook website.

• There are more details of the French Darwin's Diaries books, Les Carnets De Darwin, on the Le Lombard website (in French). The third album in the series, Dual Nature, has just been released in France.

• The downthetubes review of Darwin's Diaries 1 - The Eye Of The Celts is here.
Posted by Jeremy Briggs at 7:00 am