"The Dundee Comics Day has been the highlight of my comics year so far and I look forward in anticipation to what Chris Murray and his team have in store for next year" was how I ended my review of the 2010 Dundee Comics Day some 16 months ago, so this year's event had a lot to live up to.

As part of the Dundee Literary Festival organised by Dundee University, the Comics Day had to move with the festival from its normal timeslot in June to October putting it close to Thoughtbubble, and its academic conference, and clashing with London's MCM Expo. Yet, other than the fact that it was too cold to eat lunch outside on the front lawn, the date change does not seem to have negatively affected the event or the attendance, indeed the turnout was noticeably larger than in previous years. Whether this was down to the fact that it was term time and Dundee's students were around, or that the 2000AD fans realised that it was worth attending due to the number of script and art droids due to be there, or even that the Glasgow Comic Con in July had opened Glaswegian comics fans eyes to what was going on in the rest of Scotland, is open to debate. 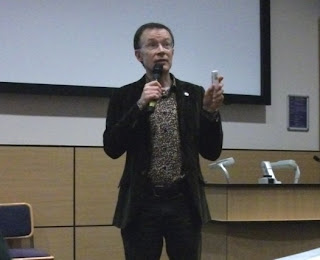 In previous years the day has begun with a morning workshop but this year the workshop was done away with and the pre-lunch session was expanded into a series of talks beginning at 11am with comics historian and author Paul Gravett (above). Paul has been to Dundee before and this year his talk was based around his new book 1001 Comic Books You Must Read Before You Die as he suggested a fairly long list of comics creators, several of which I hadn't heard of, from which to chose five.

Next up were Burke and Hare writer Martin Conaghan and artist Will Pickering, talking about their graphic novel, originally published by Edinburgh's Insomnia, and which won the Best Graphic Novel, and Conaghan best writer, at the inaugural Scottish Independent Comic Awards at the Glasgow Comic Con in July. They discussed the background to the book, their inspiration for it in the form of Alan Moore and Eddie Campbell's From Hell, plus the amount of research that they put into it to avoid the many myths that have grown up around the two murderers. 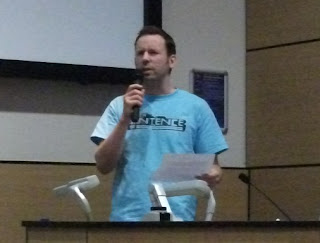 The morning session came to an end with a short talk by artist Jimmy O'Ready about his new comic Death Sentence which he writes under the pen name Montynero and which has art by Rex Royd's Mike Dowling. The audience showed their interest after this talk by buying every copy of the comic that Jimmy had with him. 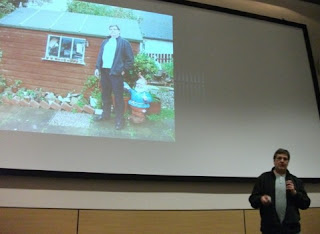 A light buffet lunch was proved as part of the day's entrance cost of £10 after which the early afternoon session took on a heavily 2000AD feel. Yet for all the fact that John Wagner is associated with 2000AD and his co-creation of Judge Dredd, he began his talk with his time at DC Thomson and showed photos of Pat Mills' former garden shed where the pair of DC Thomson men had written 23 scripts for IPC's Cor! humour comic and had 12 of them accepted. They wrote IPC humour characters such as Jack Pott and Tom Boy. He then moved on to the creation of Battle Picture Weekly as a competitor to DCT's Warlord and the attempts to shore up the falling sales of Valiant before it was amalgamated into Battle. One of the Valiant characters was the Dirty Harry-esque One Eyed Jack who mutated with the arrival of 2000AD into Judge Dredd. 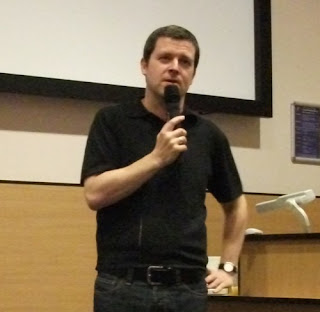 Robbie Morrison was next who has been writing Nikolai Dante in 2000AD for the last 16 years as well as creating Shimura and Shakara which, it was pointed out, sound similar but aren't. Of the two very different artists on Dante, Robbie said that he wrote to their strengths with John M Burns preferring adventure over science-fiction and Simon Fraser getting the more SF and emotionally charged stories. One snippet that I hadn't heard before was that his first professional script sale was to DCT's SF digest Starblazer and that he had written some 4 or 5 scripts for the title, none of which were used before Starblazer was cancelled in 1991. Chances are those scripts are still sitting in DC Thomson's archive. 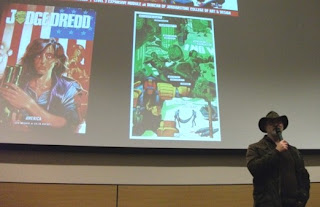 Finally in this session was artist Colin MacNeil, another of the Starblazer alumni who pointed out that he was "not a comics artist, just an artist who draws comics." Stating that he was more at home with pictures than words, Colin then went on to give a very thoughtful talk about his work over the years, his influences including his very close encounter with Rembrandt's 'The Night Watch' in Holland and his plans for a Battle of the Somme graphic novel to come out in 2016. Colin was followed by a break for refreshments and a signing session in the foyer. 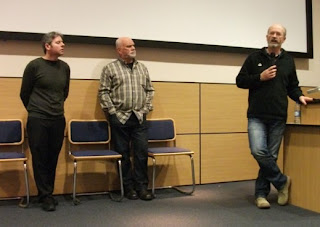 The final session of the day began with Matthew Jarron of the university's Museum Services introducing Commando editor Calum Laird (right), deputy editor Scott Montgomery (left) and former editor George Low (centre) for a short talk about the Commando Battlelines exhibition that was displaying original cover and internal artwork from the comic in the foyer. They gave a good-natured talk and answered questions about one of the great survivors of British comics during which they got what was perhaps the most off-the-wall question of the day when they were asked how much of their readership was female. Surprisingly it is 2%, or 1 in 50, which may not sound like much but it is much higher than I would have expected it to be. 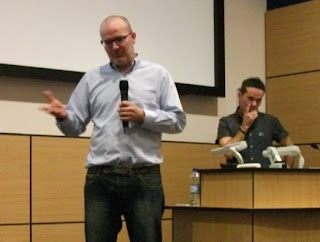 Next up was at talk by Jamie Bryan (left) of computer game firm Tiger Games who, along with the Duncan of Jordanstone College of Art and Design lecturer and one of the organisers of the Dundee Comics Day Phillip Vaughn (right), talked about their new Superman game for iPads and iPhones which has not been released yet. While it was an interesting talk, it was definitely the odd-man-out of all the talks during the day. 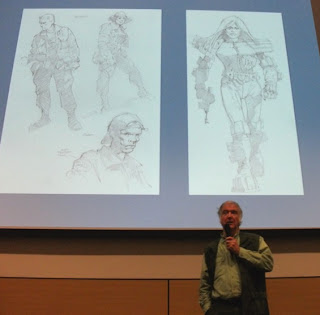 Things got back on a comics track with artist Cam Kennedy who stood at the front with the microphone and, rather than giving a talk, immediately asked for questions. Cam has a dry humour and it came across well here as questions set him off on amusing anecdotes about his career as he told the audience about his time in France and America as well as his disregard for Star Wars. After the success of his two Dark Empire series when Dark Horse asked for a third he turned them down as he was "fed up drawing a big carpet and a dustbin." When pressed by them he said that he would do a series on Boba Fett as long as John Wagner wrote it and they agreed - not realising that John Wagner hadn't even seen Star Wars at that point. With his art on the screen behind him and the chance of a sketch book of his work being published in Europe (we can but hope), Cam's session was one of the highlights of the day. 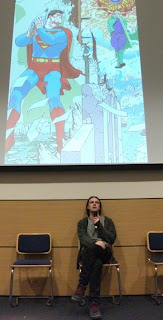 After the energy and humour of Cam came one of the most highly regarded comic strip artists of modern times, Frank Quitely, whose 'secret identity' just happens to be a quietly spoken bloke from Glasgow called Vincent Deighan. Unlike most artists who prefer their artwork to do the talking, Vinnie is at home in front of an audience and he sat at the front cradling the mic and talked about his work and career. Like Colin MacNeil, as a child he had considered books were something for school and it was comics that he read for fun at home, while his favourite pastime even then was drawing. 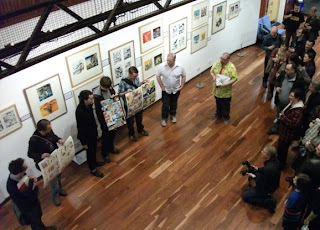 The audience were then invited to move out to the foyer for the Tartan Bucket awards presentation. In association with DC Thomson the university had run a competition to create a new 1 or 2 page humour strip in the vein of Beano and Dandy. With a honourable mention for Craig Balmer, the four runners up who received a cheque for £250 each were Steven Baskerville, Jamie Huxtable, Paul Rainey and Adam Smith while the tartan Bucket Prize was won by Steve English (below) with his two page strip Belle's Magic Mobile. As well as a cheque for £1000 and, quite literally, a bucket full of DC Thomson merchandise, Steve's strip will be published in the Beano in the new year. 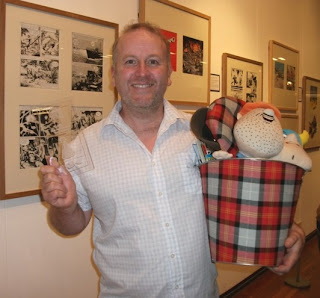 Finally, and a surprise to most not least of all Cam Kennedy, there was a short presentation by Calum Laird about the two unrelated Kennedy "brothers", Cam and Ian. Artist Ian Kennedy had quietly joined the audience towards the end of the day which meant that he was there for Calum presenting him, and John Wagner presenting Cam, with lifetime achievement awards which, it has to be said, were both very richly deserved. Despite both being Scottish, Cam (left) and Ian (right) had never met before and this candid photo below shows the moment when the men were introduced to each other for the first time by a delighted Phillip Vaughn. 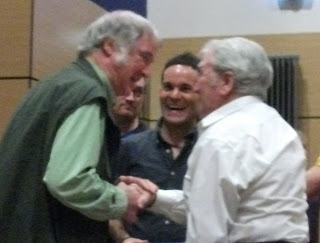 The day's talks were themed as 'Wot I Learnt From Comics' and two fairly consistent things came from that. Firstly comics creators don't read many comics (and why would they when they spend all day working on them?) and secondly, and more importantly for budding creators in the audience, if you want to make a comic just go ahead and do it - practice may not make perfect but it can only benefit you in the long run.

Practice has pretty much made perfect when it comes to the Dundee Comics Day and congratulations must go to Dr Chris Murray and his team for yet another excellent event covering both old and modern British comics and their creators. Long may it continue.
Posted by Jeremy Briggs at 7:00 am