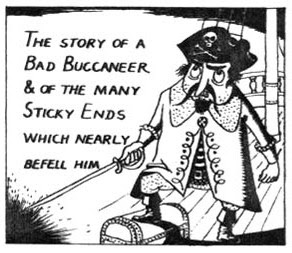 Two characters that were created for the first issue of Eagle comic in April 1950 have entered the British public's collective consciousness. The first is Eagle's most well known character, the spaceman Dan Dare, but the other, whilst well known, is rarely associated with Eagle.

Artist John Ryan created the humorous pirate Captain Pugwash for that first issue of Eagle but his adventures there didn't last long and it was the transfer of the character into a limited animation black and white TV series on the BBC in 1957 that guaranteed his fame. Despite the comparative failure of Pugwash in Eagle, John Ryan's other Eagle character, the Extra Special Agent Harris Tweed, was popular with the comic's readers and Ryan would go on to create Lettuce Leefe for Girl and Sir Boldasbrass for Swift, both of which were sibling titles of Eagle.

John Ryan passed away in 2009 but the Rye Art Gallery in his home town of Rye is about to celebrate his life and work with an exhibition of some 50 pieces of original artwork. This John Ryan Retrospective will open at 2pm on 19 November 2011 and run until 12 February 2012.

There are more details on the John Ryan Retrospective on the Rye Art Gallery website which includes the opening times of the gallery.

There are more details about John Ryan's work on the Eagle Times and Bear Alley blogs.
Posted by Jeremy Briggs at 7:00 am