In Review: Crusade - The Master of Machines 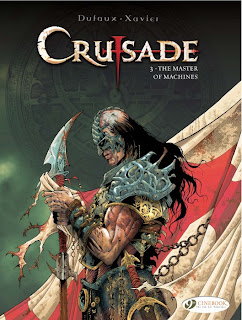 The Crusade that is missing from history continues with its third book The Master Of Machines as writer Jean Dufaux and artist Philippe Xavier continue their complex tale of religion, demons and the quest for control of the Holy Land.

Gauthier of Flanders, in an attempt to ally himself with a Jewish sect, is underground battling a demon known as the Aa while his love, Syria of Arcos, has been saved from the grossly deformed bandit chief Sarek Pasha by Sultan Abdul Razim and taken as his "guest" to Jerusalem. Meanwhile in the Christian camp the mercenary army leader know as the Master Of Machines who was summoned there by Elenore of Arcos, Robert Duke of Taranto's lover and Gauthier's wife, challenges Robert for control of the Crusader army. 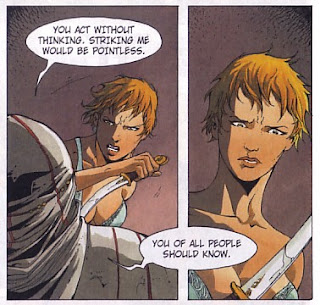 Crusade remains in almost equal parts excellent and frustrating. Excellent due to Xavier's lovely artwork and page layouts as well as the complexity of Dufaux's plotting and yet frustrating also for the complexity of the plotting which has three main story strands running at almost full speed at the same time. This book focuses more on Gauthier's battle with the Aa and the Master Of Machines challenge to Robert's command than Syria's plight and yet it places her right where, presumably, a major battle is about to take place. 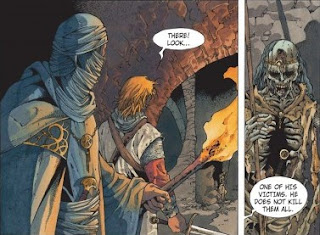 Xavier's internal artwork continues to remind me of John Bolton's especially his work on The Black Dragon, written by Chris Claremont, which like Crusade mixed Crusader knights with the supernatural, while his cover showing the Master Of Machines remains as striking as the rest of the series. Dufaux's plotting, I suspect, is only frustrating due to not having the whole story available to us and Dufaux having to get so many different characters into place before the final confrontation in the fourth book, The Fire Beaks, named for an area south of Jerusalem where the Master Of Machines considers the true riches of the Holy Land lie.

The Master Of Machines continues Crusade's lovely artwork and complex, if perplexing, plot. With the fourth book due on February 2012 I hope, and fully expect, to be able to say that it was all worth it and that the series deserves a reread from the beginning.

• The are more details of the Crusade books on the Cinebook website.

• There are more details of the original Croisade books on Le Lombard website (in French).